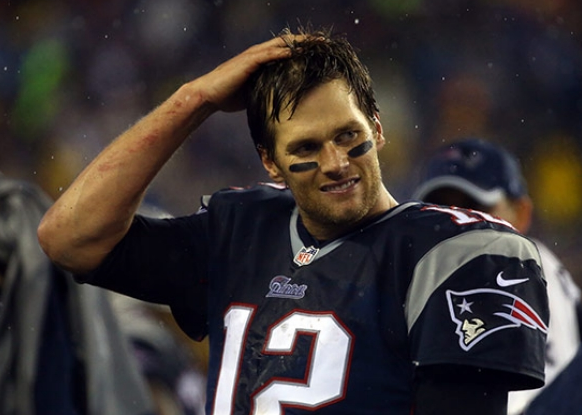 Slate’s got a great article about the backstory behind DeflateGate, complete with some really excellent data analysis. What can I say? I’m a data geek. Throw together some charts that tell a clear story that really deepens understanding of a current event and I’m ecstatic.

Now my buddy who is coming over to watch the Super Bowl on Sunday and is a huge fan of the Patriots? He might be less excited, because the article doesn’t make Tom Brady look very good.1

The story is basically this, Tom Brady (and Peyton Manning) urged the NFL to change the rules so that traveling teams could provide their own footballs for their own offense. Back in the day, the home team always provided the balls for both teams. After this change was made, suddenly the Patriots proved incapable of fumbling the football. Behold: 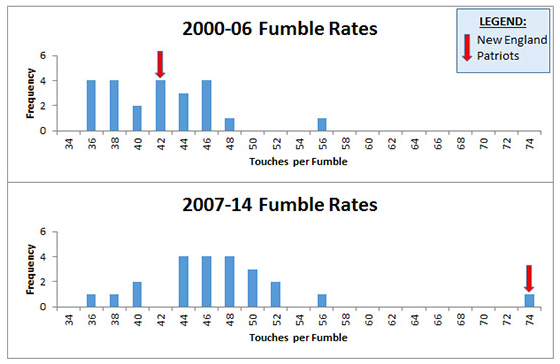 They went from having about 42 plays per fumble (about average) to having 74 plays per fumble after the new rules went into effect (off the charts). Now, I’m not sure what he’s going for with his statistics mumbo-jumbo after that, but since I’m not getting paid I’m not going to do math. I’m just gonna say: that doesn’t look like chance to me. “The bottom line is,” according to the article, that “something happened in New England. It happened just before the 2007 season, and it completely changed this team.”

Oh, and a final thought, some folks have suggested that if you take a properly inflated ball from inside where it’s warm to outside where it’s colder it will lose pressure. Technically: yes. But (given actual weather conditions that day) probably not enough to explain DeflateGate.