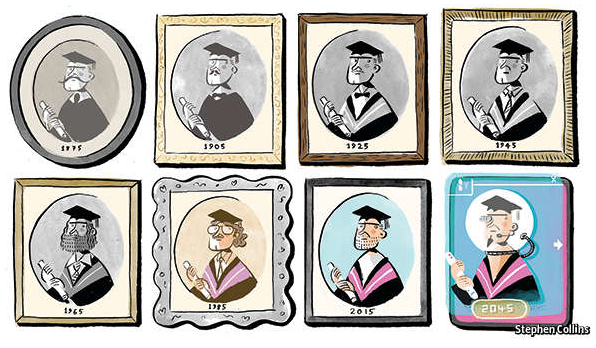 In theory, meritocracies are fair. In practice, not so much. As The Economist observes:

Today’s elite is a long way from the rotten lot of West Egg. Compared to those of days past it is by and large more talented, better schooled, harder working (and more fabulously remunerated) and more diligent in its parental duties. It is not a place where one easily gets by on birth or connections alone. At the same time it is widely seen as increasingly hard to get into.

The rest of the article tries to explain why this is so, citing assortative mating as one big reason. Perhaps because of the same social attitudes that have led more women into the workplace and to getting college degrees, “between 1960 and 2005 the share of men with university degrees who married women with university degrees nearly doubled, from 25% to 48%, and the change shows no sign of going into reverse.” These pairs are much more likely to be correlated in terms of intelligence and other genetic factors that help people be successful, for one thing. But even if you set aside the genetic component, successful people are likely to raise successful children because they value success and they obviously understand what it takes to be successful. So the more you have assortative mating, the more a meritocracy ends up looking a lot like an aristocracy after all.

So… what do we do about? The Economist article has nothing to suggest.

But, writing nearly three years ago, David Brooks did. In Why Our Elites Stink he argues, similarly to The Economist that “today’s meritocratic elites achieve and preserve their status not mainly by being corrupt but mainly by being ambitious and disciplined.” Although wealth is obviously a factor, he argues that “the real advantages are much deeper and more honest.” So, are meritocracies just fundamentally flawed? Brooks doesn’t think so:

The corruption that has now crept into the world of finance and the other professions is not endemic to meritocracy but to the specific culture of our meritocracy. The problem is that today’s meritocratic elites cannot admit to themselves that they are elites.

Brooks’ argument is definitely not a popular for a lot of reasons. First, he doesn’t want to overthrow the meritocracy. He wants to work with it. I don’t think that this is because he likes it. I think it’s because he has that conservative tragic vision of the human condition: that life is fundamentally unfair and the only way to combat that unfairness is to recognize it. Some people are born smarter, stronger, and better looking than others. That will always be true. So life isn’t fair. There will always be elites. If the elites know they are elites, they can actually respond to that in appropriate ways (e.g. by being more service-oriented). But if we deny the fundamental unfairness of life, then we’re saying that people who have all the advantages don’t have to take any particular special care to help others.

The best of the WASP elites had a stewardship mentality, that they were temporary caretakers of institutions that would span generations. They cruelly ostracized people who did not live up to their codes of gentlemanly conduct and scrupulosity. They were insular and struggled with intimacy, but they did believe in restraint, reticence and service.

Today’s elite is more talented and open but lacks a self-conscious leadership code. The language of meritocracy (how to succeed) has eclipsed the language of morality (how to be virtuous). Wall Street firms, for example, now hire on the basis of youth and brains, not experience and character. Most of their problems can be traced to this.

If you read the e-mails from the Libor scandal you get the same sensation you get from reading the e-mails in so many recent scandals: these people are brats; they have no sense that they are guardians for an institution the world depends on; they have no consciousness of their larger social role.

Although it wasn’t a focus of his, I think another major element to this is the problem of America’s obsession with individualism. We have gone overboard in rejecting our collective, social nature. That is why modern hotshots have no sense of being “guardians for an institution the world depends on.”

Life will never be fair. There will always be elites. Saying that terrifies people, because they immediately think of racial or cultural or religious bigotry. But we can’t be so paralyzed by fear that we fail to heed reality. Also, the fear are largely unfounded, as The Economist observes that elites “included people with skin of every shade but rarely anyone with parents who worked blue-collar jobs.” So here we are, in a world that is unfair where elite people will pass down their elite traits to their elite kids. We can either try to redistribute everything (which will kill all incentives and lead to total social ruin) or we can instill an ethos of service and humility in elites. It’s not a perfect solution, but it seems like the best one.

Further reading, if you’re interested in more about this problem: Forget the Rich. The Upper Middle Class Is Ruining America

3 thoughts on “What To Do About Our Hereditary Meritocracy”