Research has found that children in two-parent families are less likely to be victims of a crime compared to those in single parent households, but it has been ambiguous as to whether this is due to marriage or the neighborhoods in which married families choose to live. A recent analysis on the 2011-2012 National Survey of Children’s Health, however, “shows that even when their families live in unsafe neighborhoods, children in married two-parent families are less likely to be exposed to violent crime than children of never-married and divorced parents.” Family scholar Nicholas Zill explains, 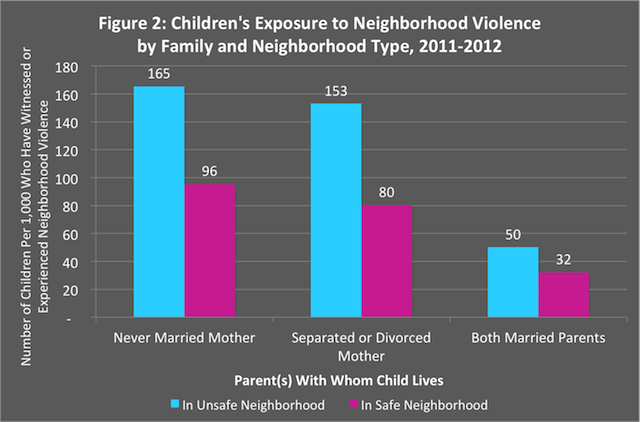 First is the stress of conflict between parents and the strain of raising children as a lone parent in reduced financial circumstances. These can lead to a lack of vigilance and the overlooking of simple precautions, such as making sure that doors and windows are locked in houses and vehicles. Second, if they have broken up with their child’s other parent, a single parent will usually begin dating and trying to find a new partner. This process often involves being out of the house at night, sometimes leaving children with no or inadequate supervision. Third, as children become adolescents, the peers they become involved with in their less-than-ideal neighborhoods and schools are often troubled ones, who can lead them into hazardous situations and activities.

For me, this is just more evidence as to why those who are concerned about social justice should be the biggest advocates of marriage.