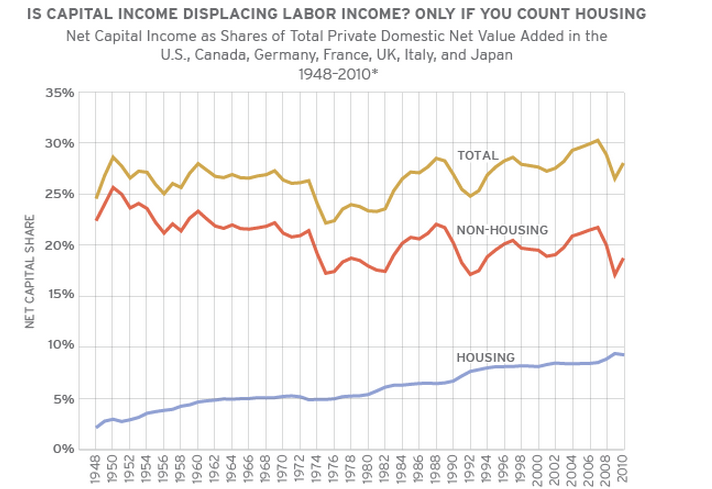 Income inequality is a big deal, and the biggest addition to the controversial discussion recently has Piketty’s tome Capital in the 21st Century.  In very simple terms, Piketty’s argument was that when you get a greater return on capital investments than the rate at which the economy as a whole grows, then wealth invariably piles up in the hands of an elite. If true, this dire prediction means the only way to preserve equality is to implement a very progressive income tax and do it globally. Which, short of an alien invasion uniting us into one, hegemonic world government, is unlikely.

“But,” as Greg Ferenstein writes, “a 26-year-old MIT graduate student, Matthew Rognlie, is making waves for an alternative theory of inequality: the problem is housing.” Rognlie’s reply is pretty simple, conceptually. He points out that cutting edge technology–whether its hardware or software–depreciates at a very great rate. Think of how fast the price of a brand new cell phone falls: within 4-5 years you can easily go from $1,000 to basically $0. So, since “technology doesn’t hold value like it used to, so it’s misleading to believe that investments in capital now will give rich folks a long-term advantage.”

So if technology doesn’t hold value, then what does? Land. Thus Ferenstein concludes: “If Rognlie is correct and we really care about inequality, it might be wiser to redirect anger towards those who get in the way of new housing [often local governments with austere zoning regulations to protect the home prices of rich owners in exclusive areas], rather than rely on taxes to solve our problems.”