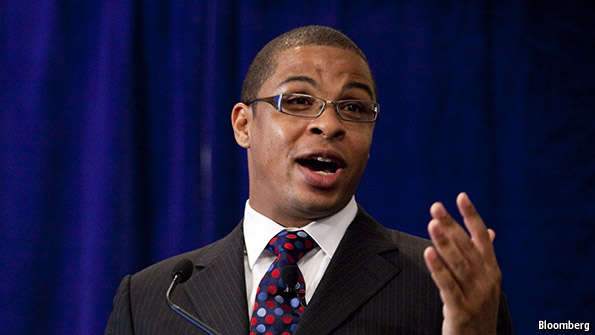 Harvard economist Roland Fryer was awarded the 2015 John Bates Clark Medal by the American Economic Association. Many top economists have been the recipients, from Milton Friedman to Paul Krugman. But as The Economist points out,

Mr Fryer’s prize…stands out. Top academic economists tend to be white. They often hail from privileged backgrounds and build their reputation on inscrutable econometrics. Mr Fryer does not fit that mould. He is the first African-American to win the medal (after having in 2007 become the youngest African-American to receive tenure at Harvard, at age 30). Mr Fryer’s childhood was not an easy one. He grew up poor, and was abandoned by his mother and beaten by his father as a child. As a teenager he survived by selling counterfeit handbags and dealing marijuana. Perhaps not coincidentally, his research agenda is heavily focused on investigations of real world policy questions. Mr Fryer has used economic tools to study America’s racial divide and to explore how it might be narrowed—economic questions that historically have been understudied. Economics, as a field, seems slow to appreciate the possibility that the introduction of new perspectives can mean that more interesting questions get asked, leading to better answers.

The AEA summarizes his work as follows:

His innovative and creative research contributions have deepened our understanding of the sources, magnitude, and persistence of U.S. racial inequality.  He has made substantial progress in evaluating the policies that work and do not work to improve the educational outcomes and economic opportunities of children from disadvantaged backgrounds.  His theoretical and empirical work on the “acting white” hypothesis of peer effects provides new insights into the difficulties of increasing the educational investments of minorities and the socially excluded.  Fryer is the leading economist working on the economics of race and education, and he has produced the most important work in recent years on combating the racial divide, one of America’s most profound and long-lasting social problems.

I first came across Fryer as an undergrad. My wife at the time was taking a sociology course in preparation for dental hygiene school. His work came in handy when she had assignments regarding racial inequality in America. I’ve tried to keep up with his work over the years. I was very excited to see him awarded.

Be sure to check out the AEA link above or this link to Bloomberg for a more in-depth overview of his research.