A fundamental assumption of the secularization thesis is that religious and scientific paradigms conflict intrinsically. Religion, comprising superstition and unreason, cannot exist side by side with science, comprising skepticism and reason. This irresoluble conflict requires the advance of science to come at the expense of religion. However, the prediction of the secularization thesis (that as the world modernizes secularism will come to dominate) has not been borne out over the last few decades. This is particularly true in the United States, where religion stubbornly refuses to to go quietly into that good night. 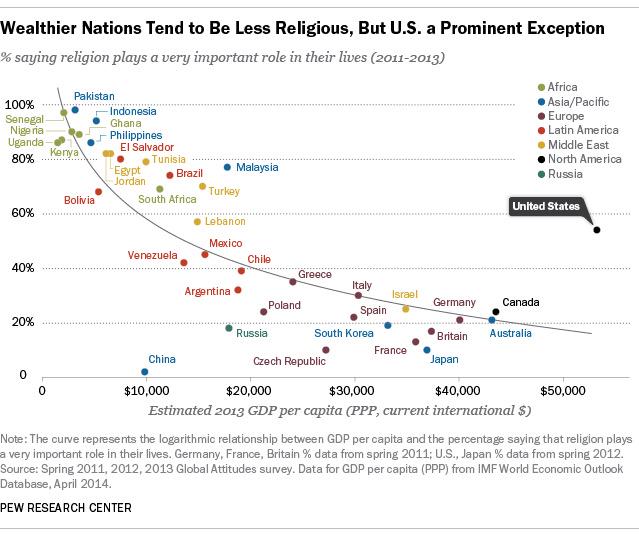 A new paper from the American Sociological Review goes deeper than merely noting the surprising longevity of American religion in the face of science, however, and severely undercuts the premise that religious and scientific paradigms are necessarily locked in a zero-sum contest.

The paper’s authors—Timothy L. O’Brien and Shiri Noy—start with data from the General Social Surveys conducted in 2006, 2008, and 2010. They measured respondents’ relationship to science based on two metrics. The first is the degree of favorability with which a person views science and the second is a person’s scientific literacy. They also measured respondents’ relationship to religion using two approaches, including asking questions like “whether the Bible is (1) the actual word of God, (2) inspired by the word of God, or (3) filled with myths and fables” and respondents’ views of their own religiosity.

Next, they used a statistical technique to determine whether the pattern of answers would be most likely to emerge from a population that had 2 cohorts (e.g. a religious cohort and a scientific one) or more than two. The results indicated that there were three cohorts present in the population.1

The first two are well known. Traditionals, as they are called, tend to score lower on scientific literacy, trust science less, embrace religion more, and are also relatively marginalized in terms of social class. Traditionals are the largest group, and make up 43% of the sample. Moderns, by contrast, tend to score higher on scientific literacy, trust science more, are dismissive of religion, and are more socio-economically elite. They make up 35% of the sample. The new third group, making up just 21% of the sample, is the most interesting.

This is the group that O’Brien and Noy designated as post-seculars, and they emphasize that it is not merely “a midpoint between modern and traditional, but a distinct way of using science and religion to interpret the world.” In terms of science, post-seculars are roughly as literate as moderns, and much more literate than traditionals. “For example,” notes the article, “47 percent of the traditional class, compared to 92 and 90 percent of the modern and post-secular groups, respectively, correctly answered that radioactivity occurs naturally.” But post-seculars do not fully share in the optimism and confidence expressed by moderns about science. In addition, there are a couple of specific questions where post-moderns diverge dramatically from moderns: human evolution and the big bang. This table—an abbreviated version of Table 2 in the paper—shows just how wide that divide is.

When it comes to a question about continental drift (which is an important question for reasons we’ll come to later), the post-secular group falls between traditionals and moderns: about 80% of post-seculars accept the theory vs 98% of moderns and 67% of traditionals. But when it comes to the big bang and human evolution, post-seculars reject the scientific consensus much more strongly than the traditionals. Post-seculars accept the big bang and human descent from animals at miniscule rates of 6% and 3%, respectively. That’s a truly astonishing degree of uniformity out of a cohort that represents more than 1/5th of the American public.

The trend is similarly fascinating when it comes to religion, with the post-secular group consistently showing the greatest levels of religiosity. They are also much more consistently conservative on political questions that have strong religious components, such as abortion and embryonic stem-cell research. In both cases, the post-secular cohort is not only more conservative than the moderns, they are more conservative than the traditionals as well. But on issues where there isn’t a direct religious component (like increasing fuel efficiency standards for vehicles or the amount of electricity generated by nuclear power), the post-seculars flip to be at least as pro-science as the moderns.

It is abundantly clear that the standard religion vs. science dichotomy is insufficient to explain what is happening in America, but the real story is harder to ascertain. Further research is required, of course, but here are some preliminary thoughts.

First, I disagree with the authors attempt to keep the secularization thesis on life support. While conceding that post-seculars demonstrate that there is no universal conflict between science and religion, the authors suppose that there are at least a few crucial issues where it really must be either religion or science, but not possibly both. Thus, “rather than the fully compatible worldview we anticipated, the post-secular perspective sees conflict between science and religion as limited to particular issues related to life. In these domains, the post-secular perspective is associated with a tendency to use religion to ground one’s views.” They also raise the possibility that post-seculars simply see questions of human and cosmological origins as unscientific and that therefore “for these individuals… evolution and the big bang are not viewed as legitimate science.”

The fundamental problem at this stage in the analysis is the failure to differentiate between science as philosophy and theory on the one hand, and science as social practice and institution on the other. It may very well be the case that scientific theory and religious belief are fully compatible on a philosophical level, but that scientific and religious authority are incompatible on a practical, social level.

Unfortunately, the issues of human evolution and cosmological evolution have become such controversial symbols in the dispute over authority, that it is impossible to separate philosophical from institutional concerns in simple survey responses. If, for example, a post-secular believes that God created human beings in His image using evolution as a mechanism, how would they respond to a question that asks about evolution without mentioning God? In a purely neutral context, it could go either way. But the contemporary context is very far from neutral. Post-seculars quite reasonably read questions on human evolution that leave out God as loaded questions about the practical, social concerns rather than as neutral ones about the science of genetics and natural selection. This interpretation is suggested by the question about continental drift. 80% of post-seculars agreed that the continents have been drifting for “millions of years,” which means that strict creationist accounts are emphatically ruled out by most post-seculars. The best way to reconcile a rejection of human evolution and a rejection of literalist creation accounts is to understand that the survey is conflating two distinct issues.

If this interpretation is correct, then post-seculars are not a cohort comprised of cafeteria scientists and cafeteria religious followers who pick and choose from the two like a double buffet to create their own idiosyncratic world views. Instead, their positive views of religion and science could very well represent a genuine project of unification and reconciliation on a philosophical level paired with an unflinching loyalty to religious authority on a practical level.