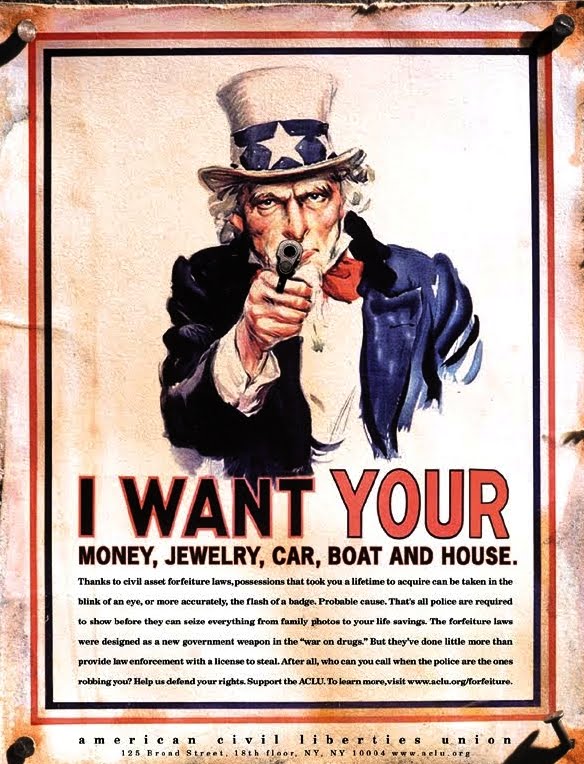 This article describes how police decided that $16,000 in cash being carried by an individual looked suspicious… so they took it.

Joseph Rivers, a 22-year-old Michigan resident, was on his way to Los Angeles in April to fulfill his dream of becoming a music video producer, according to Rivers and his lawyer, when federal agents from the Drug Enforcement Agency (DEA) boarded his Amtrak train during a stop in Albuquerque.

DEA agents approached Rivers, the only black passenger in the train car, and asked to search his bag. Inside the bag, agents found $16,000 in cash—money Rivers said he had saved up and received from family members to pursue his music video aspirations.

The DEA decided that carrying a bunch of cash is suspicious, so they took it away. Here’s what’s really troubling about this practice, called “asset forfeiture”:

There’s even a great quote the head of the DEA’s Albuquerque office: “We don’t have to prove that the person is guilty.” Nice.

This practice is pretty lucrative for law enforcement organizations, and money for all that fancy military-style gear has to come from somewhere, right?

The Washington Post reported in an investigative series last year that federal, state, and local law enforcement agents have seized $2.5 billion in cash since 2001 from nearly 62,000 people.

It gets really hard for me to read a story like this and understand exactly how this isn’t theft.

1 thought on “Asset Forfeiture Looks a Lot Like Theft”