One of the things I learned in grad school is that figuring out how much people pay in taxes can be really, really complicated. The first complication is that you have to consider not just the federal taxes, but also state and local taxes. That’s actually not too bad. What gets a lot trickier, however, is if you actually try to figure out effective taxes. Sure, it’s easy to look up the tax rates by income bracket, but that doesn’t account for things like the mortgage interest deduction. So it’s kind of an open question, are the effective taxes in the US (including state and local as well as federal) progressive? Or do the benefits at the top (like mortgage interest deduction) and the penalties at the bottom (like cigarette taxes) combine to overwhelm the statutory progressivity of the tax brackets?

Dylan Matthews at Vox has the answer: 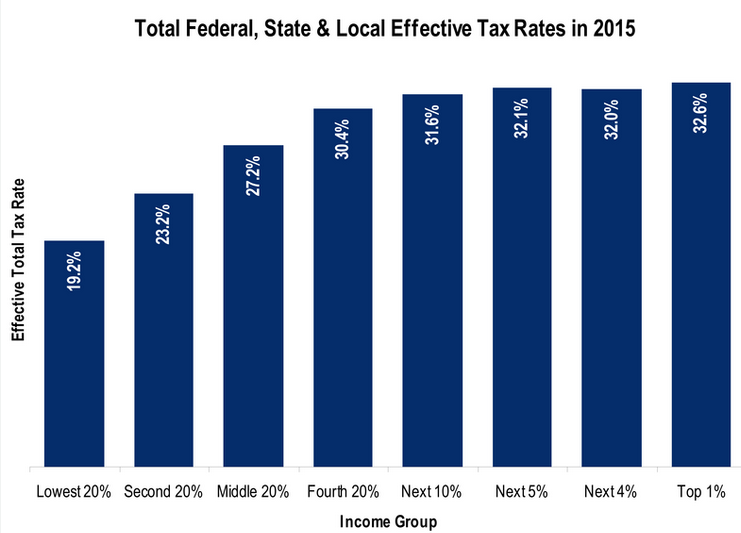 So yeah, they’re progressive, but not as progressive as you’d expect them to be. Here’s what economist Miles Kimball had to say:

This is a very nice chart showing that taxes overall are remarkably close to proportional. One of the things that suggests to me is that a much simpler tax system that had people paying a proportional tax such as a VAT tax, coupled with a lump-sum transfer to the poor, would not be such a big change after all. We probably cause a lot of distortions by pretending to have a progressive tax system instead of admitting that we have a mostly proportional tax system and optimizing it.

Amen. There are much, much simpler (and therefore cheaper and healthier) ways to get to where we’re at.

I will add one caveat, however. When you’re figuring out how much people pay in taxes, it’s probably also worth trying to determine how much they receive in direct government benefits. If someone pays 20% of their income in taxes but then receives food stamps worth 20% of their income, isn’t their net contribution zero? From my experience, if you do this analysis then initially you get a much, much more progressive system, but you also get a much, much trickier problem. A lot of the benefits to the wealthy are harder to track than direct government expenditures. What’s the benefit, for example, of friendly zoning laws that artificially inflate land prices and thus benefit the upper class?