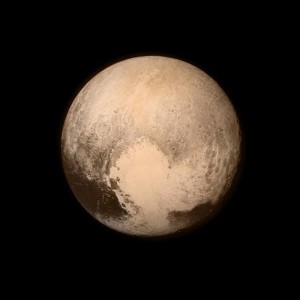 Pretty awesome read and video from The Guardian on the Pluto flyby today:

Cheers, whoops and flag waving broke out at Nasa’s New Horizons control centre as scientists celebrated the spacecraft’s dramatic flyby of Pluto, considered the last unexplored world in the solar system. The probe shot past at more than 28,000mph (45,000 km/h) at 12.49pm BST (7.49am ET) on a trajectory that brought the fastest spacecraft ever to leave Earth’s orbit within 7,770 miles of Pluto’s surface…Stephen Hawking, the Cambridge cosmologist, joined in congratulating the New Horizons team in a recorded message. “Billions of miles from Earth this little robotic spacecraft will show us that first glimpse of mysterious Pluto, a distant icy world on the edge of our solar system. The revelations of New Horizons may help us to understand better how our solar system was formed. We explore because we are human and we long to know,” he said.

The whole thing is definitely worth reading. But perhaps the best part?:

The moment, played out on Tuesday to the sound of The Final Countdown by the 1980s glam metal band Europe, marked a historic achievement for the US, which can now claim to be the only nation to have visited every planet in the classical solar system.