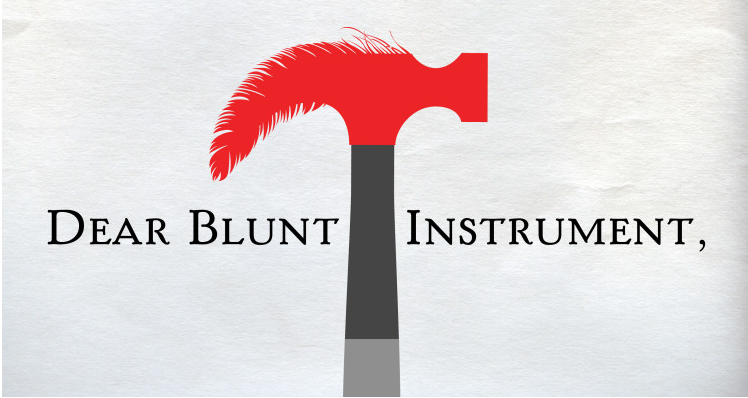 That was the question a self-described “white, male poet—a white, male poet who is aware of his privilege and sensitive to inequalities facing women, POC, and LGBTQ individuals in and out of the writing community” asked at The Blunt Instrument (“a monthly advice column for writers”). Well, more specifically, he said:

It feels like a Catch-22. Write what you know and risk denying voices whose stories are more urgent; write to learn what you don’t know and risk colonizing someone else’s story. I genuinely am troubled by this. I want to listen but I also want to write—yet at times these impulses feel at odds with one another. How can I reconcile the two?

The response took a long, convoluted, and circuitous route to get where it was going, but the basic answer was simple: Yes, stop writing. Or, more specifically, you can go ahead and write all you like, but you should stop trying to get your works published.

Don’t be a problem submitter. When I edited a magazine, we got far more submissions from men, and men were far more likely to submit work that was sloppy and/or inappropriate for the magazine; they were also far more likely to submit more work immediately after being rejected. When you submit writing, you’re taking up other people’s time. Be respectful of that. I said in my last column that getting published takes a lot of work, which is true—but most of that work should take the form of writing, and revising, and engaging with people in the writing world, not just constantly sending out new work, which starts to look like boredom and entitlement.

Think of this as something like carbon offsets. You are not going to solve the greater problem this way, on your own, but you might mitigate the damage.

It’s vague enough for plausible deniability, but the logic is clear. The only way to “mitigate the damage” is to submit fewer works. Publish less.

This is the logic behind the social justice movement. It’s not always as clear cut as this, but it’s always there. For a fantastic article documenting just how long this mentality has been around, I recommend Privilege and the working class. I don’t agree with all of it (obviously, as it is printed in The Socialist Worker), but the analysis of nascent social justice warrior ideology (aka “privilege theory”) is spot on:

Third, white workers were blamed for systemic racism because their “privileges” came, purportedly, at the expense of Blacks: white workers got more because Blacks got less, and vice versa. This assumption bought into the liberal capitalist idea that the size of the share of the economic pie available to workers is fixed and highly limited, and that different sub-groups of workers must fight against each other to expand their shares. Privilege theory focused on workers battling each other for the same shares, rather than on their fighting together for a just division of the share appropriated by the bosses–that fight, in the form of shop floor and union struggles for class demands, was explicitly opposed.

The analysis of capitalism is tragically and catastrophically off-base, but the insight that the essentially divisive nature of SJW ideology is itself a statist (and therefore elitist) tool is entirely valid. Once you accept the premise that we are fundamentally divisible into racial, sexual, and other categories, the possibility for cooperation and synergy disappears and all that is left is fighting over scraps.