I’ve never identified as a pacifist. However, I think this is due to my view of pacifism being tainted by the American expression of it. As economist Bryan Caplan explains,

I’m a pacifist, but I’ve never been intellectually impressed with the U.S. peace movement.  The sound argument against war, in my view, combines (a) the common-sense moral view that, “You shouldn’t kill innocent people unless you know with high certainty that the long-run benefits heavily outweigh the short-run costs” with (b) the empirical fact that predictions about war’s long-run benefits are extremely inaccurate.  U.S. peace activists’ typical arguments against war are both too weak and too strong: Too weak because they focus on the badness of particular leaders and regimes rather than the murderous essence of modern war, too strong because they make overconfident, overblown predictions about the long-run effects of wars they oppose.  Worse still, U.S. peace activists have a ghastly tendency to side with despicable totalitarians and bloodthirsty nationalists.

Even more frustrating is the fact that “Democrats’ war policies were very similar so those of their Republican predecessors, but the antiwar movement…durably dissolved once the Democrats gained power.” All one has to look at is the data (drawn from a recent book by political scientist Michael Heaney and sociologist Fabio Rojas) on antiwar protest size, media coverage, and partisan breakdown: 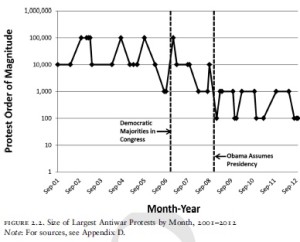 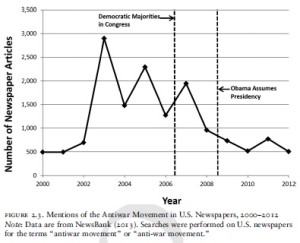 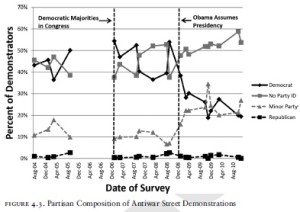 The sad fact is “Democrats energized the antiwar movement, then dropped it as soon as their side regained power.  “We observe demobilization not in response to a policy victory, but in response to a party victory.”  Why?  Because Democrats’ real target was not war, but Republicans…Though they’re too polite to come out and say it, Heaney and Rojas’ book shows that the good cause of peace was not merely ineptly defended, but insincerely defended.  While the peace movement no doubt includes some honest-to-goodness pacifists, they’re honorable outliers.  The peace movement was not about peace.”

2 thoughts on “On Being Pacifist”