So this is rad: 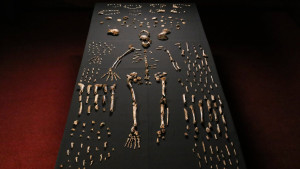 Acting on a tip from spelunkers two years ago, scientists in South Africa discovered what the cavers had only dimly glimpsed through a crack in a limestone wall deep in the Rising Star Cave: lots and lots of old bones.

The remains covered the earthen floor beyond the narrow opening. This was, the scientists concluded, a large, dark chamber for the dead of a previously unidentified species of the early human lineage — Homo naledi.

The new hominin species was announced…by an international team of more than 60 scientists led by Lee R. Berger, an American paleoanthropologist who is a professor of human evolution studies at the University of the Witwatersrand in Johannesburg. The species name, H. naledi, refers to the cave where the bones lay undisturbed for so long; “naledi” means “star” in the local Sesotho language.