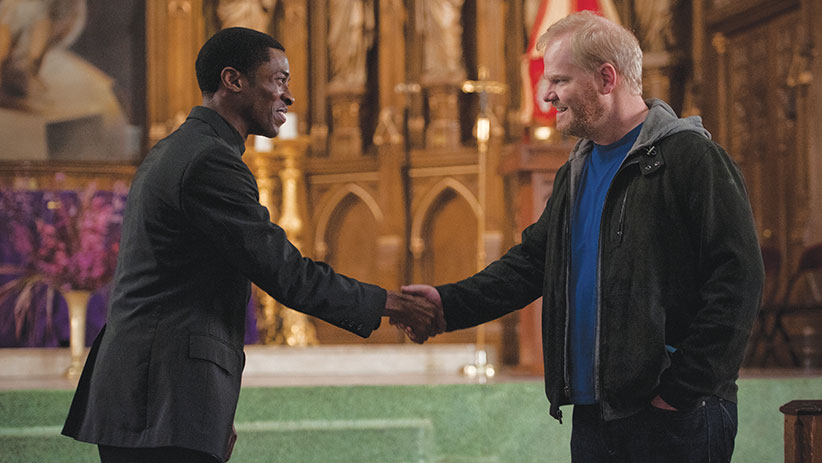 Here’s another great post from Junior Ganymede: The Sheltered Ones.

In the post, MC makes two points that seem a little dischordant at first, but really are not.

First, religious folks are not really as sheltered as people think. He makes this point first with an exchange from the Jim Gaffigan show in which Gaffigan is worried that local Catholic priest Father Nicholas will find his standup routine jarring:

Jim: Look, you may be exposed to some harsh language and sexual content.

Father Nicholas: I think I can handle it, Jim. When I was eight years old, I saw soldiers burn down my village.

Jim: Yeah, but was there cursing?

From here, MC extrapolates to the Book of Mormon Musical, which is all about a show (played to “Well-to-do New Yorkers, people who use “summer” as a verb.”) about how Mormon  missionaries (who sometimes actually, you know, go to Africa and live there for two years and eat the food and learn the  languages and dialects) are hopelessly naive and sheltered. Uh, ok.

MC is really, really right here. Involvement in a religious community–especially one like Mormonism–is going to bring you face-first into a lot of real, actual human experiences. The two-year missions that Mormon’s serve are one extreme example, but not an isolated one. MC has another, completely ordinary one:

“Sheltered” is whatever uncool people who don’t buy what we’re selling are. Sure, maybe you accompanied your dad to the hospital so that he could give a blessing of comfort to the old, dying sister you home teach. Maybe you heard her in such pain that you could barely stand to hear her breathe, but you stood there and sang her favorite hymn to her, out of tune, and she acted like it was the Mormon Tabernacle Choir.

But have you tried marijuana? Do you go to second base with your girlfriend? Pfffft. Then you don’t know what the “real world” is like.

What can I say to this, other than simply: amen and amen.

MC’s second point is where the apparent dischord comes in. He points out that, quite rightly, the point of a family is to shelter children. That’s what they are there for. But wait, didn’t we just say that religious people aren’t sheltered? Well, it all depends on what you mean by “sheltered.” If you mean living in an antiseptic world where you pay someone else to cook your food and do your dishes and maybe change your kids diapers, then no: religious folk are not generally sheltered. But if you mean having a secure place to come home to that is safe with parents who guard the threshold from dangers spiritual and physical? Then yes: religious folks are very, very good at sheltering their children as they should be.

Obviously it’s not as cut-and-dry as “all religious people are actually deep and all secular people are shallow”, but that’s actually closer to the truth than the current trendy view of who knows and does not know what really happens out there in the world.

1 thought on “JG: The Sheltered Ones”