Martin Shkreli, hedge fund manager and founder of Turing Pharmaceuticals, has been described as the “most hated man in America” and an example of “everything that is wrong with capitalism” due to his company’s acquisition of the rights to the drug Daraprim and the jacking up of the price from $13.50 to $750 per pill. While incentives (a word typically associated with capitalist rhetoric) obviously played a role, it may not be due to the supposed exploitative underpinnings of capitalism and for-profit business. Blogger Will Wilkinson makes a number of important points over at the Niskanen Center on the perverse incentives created by regulation:

Bringing a copy of Daraprim to market would require filing an Abbreviated New Drug Approval with the FDA…The FDA is notoriously slow and the process is expensive…Shkreli was willing to pay such a huge sum because he could see that no Daraprim copies were in the regulatory pipeline, meaning that, for a time, he would have a monopoly and could reap monopoly profits by callously demanding exorbitant prices from patients who have no alternative to the drug. The scandal of Martin Shkreli’s profiteering tells us very little about capitalism, per se, but it does tell us a lot about the perverse market incentives that overzealous regulation can create.

Drawing on an argument made by economist Alex Tabarrok, Wilkinson points how difficult it is to get a generic drug approved in the U.S., noting that “it’s illegal to sell imported generic versions of the drug that have not been independently approved by the FDA. Some of these generic brands have been blessed by European countries with perfectly sane and safe drug approval processes, but the U.S. won’t recognize foreign vetting, and insists on wasting resources, time, and lives with redundant oversight…If “capitalism” is a system of competitive markets in which prices adjust with supply and demand, then it definitely wasn’t capitalism, in that sense, that led Shkreli to charge $750 for something that costs pocket change on a free market. The culprit is a regulation…that makes it illegal for Americans to buy well-tested, imported generics on the open market.”

Finally, he places growing inequality at the feet of rent-seeking:

In an important new essay in National Affairs, Steven Teles, a political scientist at Johns Hopkins, points out that a fair number of the top 1% of earners owe a sizable part of their incomes to regulatory barriers to entry. Doctors, dentists, and lawyers all profit from licensing schemes that limit competition. Car-dealerships are, more or less, politically-granted concessions protected from competition. Government contractors and consulting firms that specialize in regulatory compliance reap outsized gains from heavily politicized markets. “[R]ents are pervasive in the fields of finance, entertainment, and technology,” Teles observes...[I]f Teles is right, regulation-loving progressives will need to reconcile themselves to the fact that the economic inequality and injustice they deplore may be driven in no small measure by regulations they might otherwise favor. This suggests that fighting inequality requires more than taxing America’s Martin Shkrelis more heavily—though it may require that, too. Pushing for a more equitable economy also means pushing for reforms like ending the ban on the importation of prescription drugs that have been deemed safe by, say, Canada or Germany. Which is to say, well-targeted “deregulation” is the egalitarian’s friend. 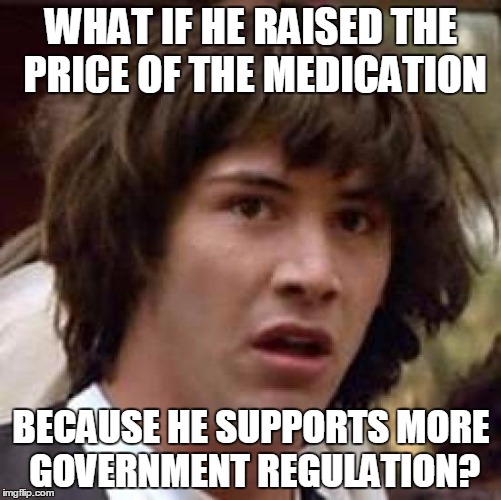 Wilkinson concludes by stating that “Martin Shkreli’s brazen legal fleecing would be impossible in an unfettered market. He bought himself a monopoly made entirely of health-and-safety red tape.” And while outrage is warranted, “we ought to be outraged also because Shrkeli’s racket is a straightforward consequence of stupid over-regulation and symptomatic of the way badly fettered markets generate injustice.”

6 thoughts on “Shkreli: Product of Capitalism or Red Tape?”