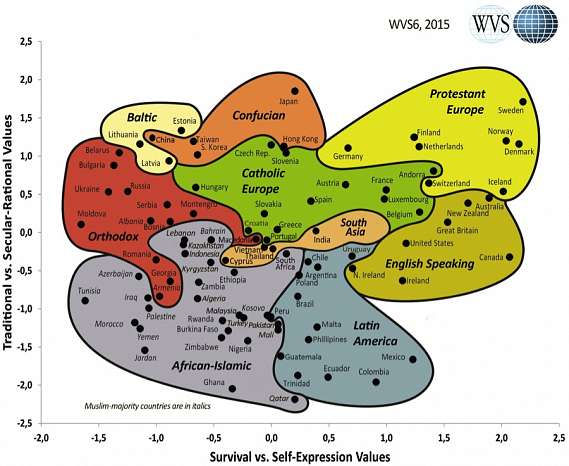 The above graph comes from the World Values Survey Database. As you can see, the vertical line moves from traditional values (religion, ritual, hierarchy, authority) to secular values, while the horizontal line moves from survival values (economic and physical security) to those of self-expression. Social psychologist Jonathan Haidt provides this helpful explanation:

The best way to understand the graph is to consider that nearly all societies used to be agricultural societies. Pre-industrial farming cultures generally have traditional and survival values (they cluster in the bottom left quadrant of the map). Life is hard and unpredictable, so you should do your duty, pray to the gods, and cling to your extended family for protection.

But as countries industrialize and people leave the land and enter factories, wealth rises and values shift.  Interestingly, countries don’t just move diagonally, from the poor quadrant (currently occupied by the Islamic and African nations) to the rich quadrant (anchored by Scandinavia, in the upper right). Rather, there is a two-step process. First, countries move upward, from traditional/survival values to secular/survival values. When money comes from fitting yourself into the routines of factory production, there’s little time or room for religious ritual. People express materialistic values in this quadrant—they want money, not just for security, but for the social prestige it can buy.

…Societies [then] transition to more service-based jobs, which require (and foster) very different skills and values compared to factory jobs. Also, as societies get wealthier, life generally gets safer, not just due to reductions in disease, starvation, and vulnerability to natural disasters, but also due to reductions in political brutalization. People get rights. The net effect of rising security is to transform people’s values in ways that the modern political left should love.