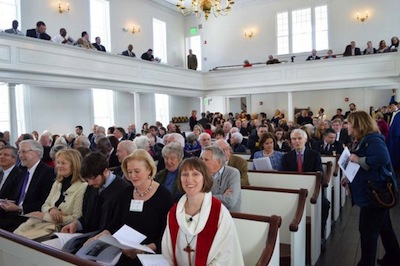 It is not news to anyone that mainline Protestant Christian denominations are simultaneously the most liberal and the most white. Despite that, the findings of a new study published in the Journal for the Scientific Study of Religion may raise a few eyebrows:

This article reports the results of a nationwide audit study testing how Christian churches welcome potential newcomers to their churches as a function of newcomers’ race and ethnicity. We sent email inquiries to 3,120 churches across the United States. The emails were ostensibly from someone moving to the area and looking for a new church to attend. That person’s name was randomly varied to convey different racial and ethnic associations. In response to these inquiries, representatives from mainline Protestant churches—who generally embrace liberal, egalitarian attitudes toward race relations—actually demonstrated the most discriminatory behavior. They responded most frequently to emails with white-sounding names, somewhat less frequently to black- or Hispanic-sounding names, and much less to Asian-sounding names. They also sent shorter, less welcoming responses to nonwhite names. In contrast, evangelical Protestant and Catholic churches showed little variation across treatment groups in their responses.

So, it’s those crazy evangelicals and Catholics–long associated with the American right and therefore with bigotry of every description–who were actually the most welcoming to minorities.

(Hat tip to Secular Right on this one.)