The Economist has a short piece on climate change and politics that is as obvious as it is interesting. The partisan divide on climate change began in 1997 “when a Democratic president, Bill Clinton, threw his weight behind the UN effort to introduce mandatory caps for greenhouse-gas emissions.” Political support of science often has nothing to do with scientific literacy (as the Cultural Cognition Project at Yale has demonstrated). “Knowledge of science makes little difference to people’s beliefs about climate change,” the article states, “except that it makes them more certain about what they believe. Republicans with a good knowledge of science are more sceptical about global warming than less knowledgeable Republicans.” Climate change also seems to a concern of the privileged:1 “The rich are more concerned about climate change than the poor, who have many other things to worry about. A giant opinion-gathering exercise carried out by the United Nations finds that people in highly developed countries view climate change as the tenth most important issue out of a list of 16 that includes health care, phone and internet access, jobs, political freedom and reliable energy. In poor countries—and indeed in the world as a whole—climate change comes 16th out of 16.”

What is perhaps most interesting is that despite the gaps in percentage, the trends tend to be the same for Republicans, Independents, and Democrats. 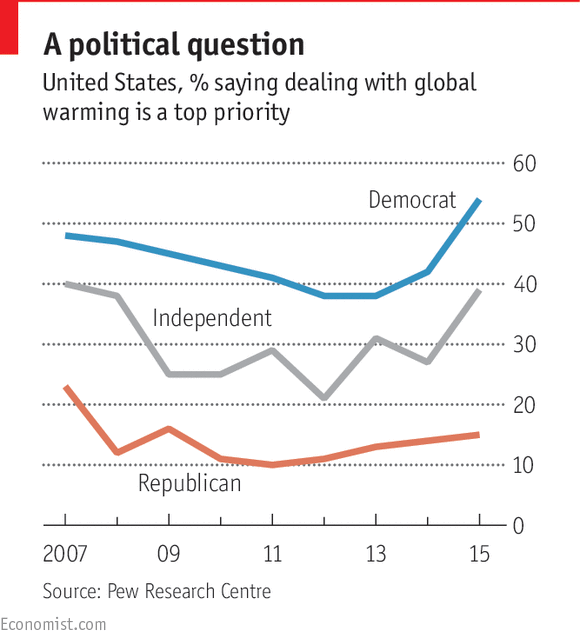