This week I’m going to start out with pop culture and Dietrich von Hildebrand before bringing it home to Elder Eldred G. Smith’s talk from the Friday morning session of the October 1971 General Conference: Decisions.

The crux of Dietrich von Hildebrand’s The Heart: An Analysis of Human and Divine Affectivity

is that Western philosophy has been wrong to ignore the heart (“the affective sphere” or, in simple terms, our emotional nature) in favor of its obsession with rationality and will. His argument is complex and covers a lot of ground, but here is perhaps the one quote that has stayed with me the most since finishing the book:

If a man were impelled by a Kantian duty ideal to help suffering people by efficient actions of all kinds, but did so with a cool and indifferent heart and without feeling the slightest compassion, he certainly would miss an important moral and human element. It may even be that the gift bestowed on a suffering person by a true and sincere compassion and by the warmth of love cannot be replaced by any benefit we can bestow on him by our actions if these are done without love.

Serving is not enough. Your heart has to be in it.

I believe this is true, but in a way it also confounds our beliefs about obedience. The trick is that we can force our actions to conform to standards, but we cannot directly force our heart to feel a particular way. Anyone can give 10% of their income to tithing, if you just exercise the will power to do it. But how do you make yourself love your neighbor? How do you make yourself love God?

Of course there are good, practical tips for fostering and protecting feelings of love (often discussed in self-help books for marriage or family relationships), but we can’t avoid the fact that our control over our heart is indirect. And, at first, there’s an odd contradiction here between Nephi’s “I will go and do” attitude toward obedience (which is very much centered on action) and the actual greatest commandments: to love God and to love our neighbor involve action, of course, but they are also focused on emotion. So, how do we “go and do” something that relies on our heart feeling a particular way?

We can’t. Not alone, anyway.

This has been a really profound realization for me, and I had it on my mind already as I read Elder Smith’s talk where he said, for example, “the Lord will not permit Satan to try us beyond our ability to resist or withstand his efforts, if we will accept his help.”1 That’s a really important qualification, and for me it’s new.

In a sense, of course, the information has always been there. Nephi’s famous “go and do” speech2 includes the statement that he knows God will provide a way for us to accomplish the commandments we’re asked to perform, but somehow I’ve always had the idea that this means there is a way—a road or a path—but that we’ve got to walk it on our own. That’s not actually what Nephi said. That’s just how I’ve always heard it.

But going it alone is never a part of the hero’s journey. I’m reminded of the classic 1986 Nintendo game The Legend of Zelda. The hero, Link, gets his first weapon from an elderly man who tells him, “It’s dangerous to go alone! Take this.” 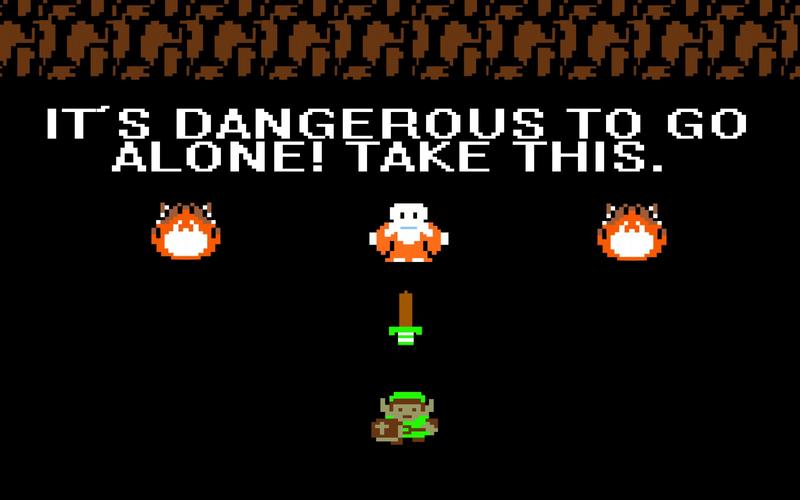 Another example would be Harry Potter’s confrontation with Serpent of Slytherin in the Chamber of Secrets. Prior to the battle, Dumbledore told Harry, “Help will always be given at Hogwarts to those who ask for it.” During the battle, the Sorting Hat appears and gives Harry the Sword of Godric Gryffindor, with which he is able to defeat the basilisk.

You might think it’s a little silly for me to quote children’s books or 1980s video games alongside Catholic theologians all to make a point from a General Conference talk. And I’ll admit, part of it is in fun. But I also strongly believe that there are so many sources of light for us in this world, if we only know where to look for them. In a way, that’s one of the things that reading the General Conference talks helps me to do: calibrate my relation to the Spirit so that I can find sources of inspiration all around me.

And I need that constant reminder. Because, returning to Elder Smith’s talk, “The Lord has made no promise to those who try to go it alone. As soon as you think you can lick the devil alone, on your own, without the Lord’s help, you have lost the battle before you start.”

That exact quote has come back to my mind again and again: “The Lord has made no promise to those who try to go it alone.” I had another chance to feel the bite of that mistake on Sunday. I am a Gospel Doctrine teacher, and I love this calling. There is no calling I would rather have ever, and I try very, very hard to do a good job of bringing the Spirit into my lessons and teach what the Lords would have me teachr.

But I don’t always succeed.

There are basically two variables in how a lesson goes, at least from my perspective. The first is how much I prepare. The second is how I feel as I go into the lesson.

On Saturday, I spent four or five hours working on my lesson, which is longer than the 1-2 hours that I usually spend. I was really pleased with my research and my outline. I felt confident that I had it covered. And when I went in and taught my lesson… it didn’t go very well. Not as well as I’d hoped, anyway. I frequently felt lost as I was teaching, struggling to remember where I’d placed a quote in my notes or unsure about which way to take the lesson when there was not enough time to do everything.

The problem was I thought I could go it alone. I thought I had this one. And so I didn’t rely on the Lord as much as I ought to have.

The sad thing is how many times I’ve had to relearn this lesson. I’ve been teaching for 3-4 years now, and the pattern is always the same. I have to work hard to prepare the lesson and I have to rely on the Lord. In practice, this means I have to be a little bit scared going into it. Hopefully I’ll grow out of that and be able to rely on the Lord with confidence instead of out of nervousness, but the point is: I need to realize that I need help. And then it’s there. As Elder Smith said, “When you desire to do what the Lord wants you to do because he wants you to, then ask him for help; then keeping these laws and commandments becomes easy.”

Here are some quotes from the other talks that I also liked:

The Purpose of Life: To Be Proved by Elder Franklin D. Richards

“Although it is not customary for one to seek out the difficult or unpleasant experiences, it is true that the trials and tribulations of life that stand in the way of man’s growth and development become stepping-stones by which he climbs to greater heights, providing, of course, that he does not permit them to discourage him.”

“A temple, first of all, is a place of prayer; and prayer is communion with God. It is the ‘infinite in man seeking the infinite in God.’ Where they find each other, there is holy sanctuary—a temple.”

“I Know That My Redeemer Liveth” by President John Fielding Smith

“The supreme act of worship is to keep the commandments, to follow in the footsteps of the Son of God, to do ever those things that please him.”

The Only True and Living Church by President Boyd K. Packer

“Some members of the Church who should know better pick out a hobby [piano] key or two and tap them incessantly, to the irritation of those around them. They can dull their own spiritual sensitivities. They lose track that there is a fullness of the gospel and become as individuals, like many churches have become. They may reject the fullness in preference to a favorite note. This becomes exaggerated and distorted, leading them away into apostasy.”

A Time of Testing by Henry D. Taylor

“We will all have our Gethsemane.”

“This Is My Beloved Son” by Loren C. Dunn

“Although the amount of time we spend is important, probably the more important thing is the ability to build our children into our lives.”

“The critical and complaining adult will be less effective than the interested and understanding… We must love our young people, whether they are in righteousness or in error.”

Here are some of the other talks from this weeks’ iteration of the General Conference Odyssey. Not all the links were ready when this post was finished, however, so check out the constantly updated index for a complete list. You can also follow along by joining the Facebook Group.