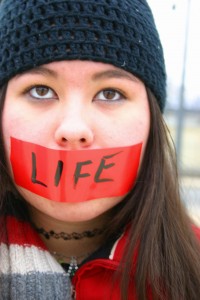 I know we’ve had a lot of pro-life pieces here recently, I guess the March for Life that coincides with the anniversary of Roe v. Wade brings it out in us.  The National Review has a great piece from an early 70s “anti-war, mother-earth, feminist, hippie college student” who once believed the pro-choice message.  The piece explores how she was eventually persuaded otherwise (hint: science, the absence of rarity, and pro-womanhood.)  It includes great quotables like

Abortion can’t push the rewind button on life and make it so she was never pregnant. It can make it easy for everyone around the woman to forget the pregnancy, but the woman herself may struggle.

Abortion gets presented to us as if it’s something women want; both pro-choice and pro-life rhetoric can reinforce that idea. But women do this only if all their other options look worse. It’s supposed to be “her choice,” yet so many women say, “I really didn’t have a choice.”

We had somehow bought the idea that abortion was necessary if women were going to rise in their professions and compete in the marketplace with men. But how had we come to agree that we will sacrifice our children, as the price of getting ahead? When does a man ever have to choose between his career and the life of his child?