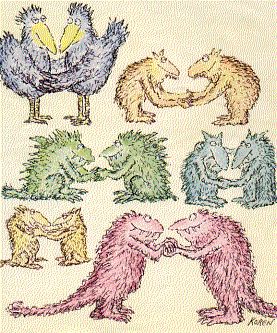 The Don Drapers of the world used to marry their secretaries. Now they marry fellow executives, who could very well earn more than they do. With more marriages of equals, reflecting deep changes in American families and society at large, the country is becoming more segregated by class.

This is how The New York Times opens an insightful article on the topic of assortative mating. The rise in assortative mating (or class segregation: take your pick) is the changing “nature of marriage itself…It used to be about the division of labor: Men sought homemakers, and women sought breadwinners. But as women’s roles changed, marriage became more about companionship, according to research by two University of Michigan economists, Betsey Stevenson and Justin Wolfers (who also contributes to The Upshot). Now, people marry others they enjoy spending time with, and that tends to be people like themselves…Another reason people are finding mates like themselves is that they are marrying later, so they know more about their partners’ prospects and increasingly meet at work. People were least likely to marry those with similar educational backgrounds around the 1950s…when people married very young.” This is an international trend, with “40 percent of couples in which both partners work…belong[ing] to the same or neighboring income bracket, up from 33 percent two decades ago, according to 2011 data from the Organization for Economic Cooperation and Development, which includes 34 countries. Two-thirds have the same level of education.” The article concludes,

Researchers say the rise in assortative mating is closely linked to income inequality. The two have increased in tandem, Dr. Schwartz, the sociologist from the University of Wisconsin, said: “People who are married tend to be more advantaged, and on top of that, more advantaged people are marrying people like themselves, so those people tend to be doubly advantaged.”

The effects could become more pronounced in future generations. Studies tell us that parents’ income and education have an enormous effect on children’s opportunities and achievements — and children today are more likely to grow up in homes in which parents are more similar than different.

I’ve written about assortative mating before. It is becoming more and more apparent that this is a major player in the class divisions over the last several decades.