On the very large sample size of my Facebook friends and my own personal feelings (so clearly, sound and publishable data), I’ve noticed that Mormons (read: my Facebook feed and myself. Except, I guess, not me at this moment.) are kind of quiet about the election this year. I’ve never seen it happen (on my Facebook feed).

I’m going to extrapolate from this great sample of data: I wonder if this silence has to do with the following.

This year we have a super rich guy with multiple marriages, multiple failed businesses, no government experience, no experience turning around a failed business, no (previously) conservative values, who is vulgar, rude, hates immigrants, hates women, speaks without learning, and is doted upon by the media (even when they are making fun of him its with a gentle glee that their (read: Democratic) nominee will surely beat this buffoon). 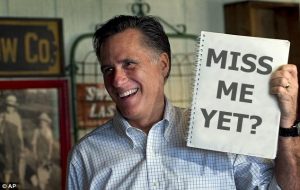 Once upon a time we had an amazing anti-Trump candidate (other than he was also rich, but only 1/18th as rich as Trump). But this candidate had this YUGE personal problem. He was a Mormon. And that just won’t do. The media, Republican establishment, and core Republican (conservative? evangelical? INSANE?) voters just could not allow a stand-up guy like this to be the nominee, unless of course it was against a sitting president, a set-up for failure.

This is what you have done to us media (Democrats?) and Republicans. But they haven’t just done it to Mormons. They’ve done it to America.

3 thoughts on “Have Mormons Checked Out of the Political Process?”