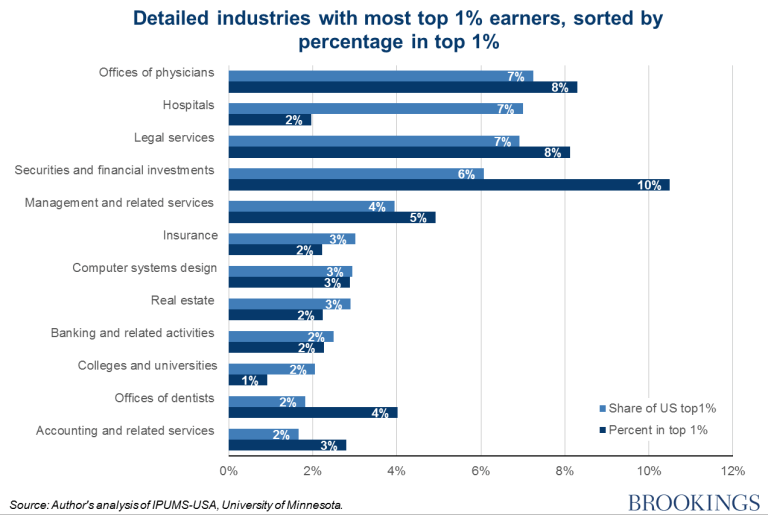 “Curbing this inequality requires a clear understanding of its causes,” writes Brooking’s Jonathan Rothwell. “Three of the standard explanations—capital shares, skills, and technology—are myths. The real cause of elite inequality is the lack of open access and market competition in elite investment and labor markets. To bring the elite down to size, we need to make them compete.” He explains that–despite the claims of people like Robert Reich–corporate profits actually represented a lower share of GDP (4.9%) between 1980 and 2014 than between 1950 and 1979 (5.4%).

So, what’s going on here? The simple explanation is that wages and salaries are an inadequate measure of the share of economic benefits flowing to labor. Wages and salaries have declined as a share of total income, largely for two reasons. First, total national income includes government transfer payments, which are rising because of an aging population (e.g., Social Security and Medicare). Second, companies have greatly increased non-salary compensation (e.g., healthcare and retirement benefits). Total worker compensation plus transfer payments have actually slightly increased as a share of total national income, from 79 percent between 1951 and 1979, to 81 percent for the years from 1980 to 2015: 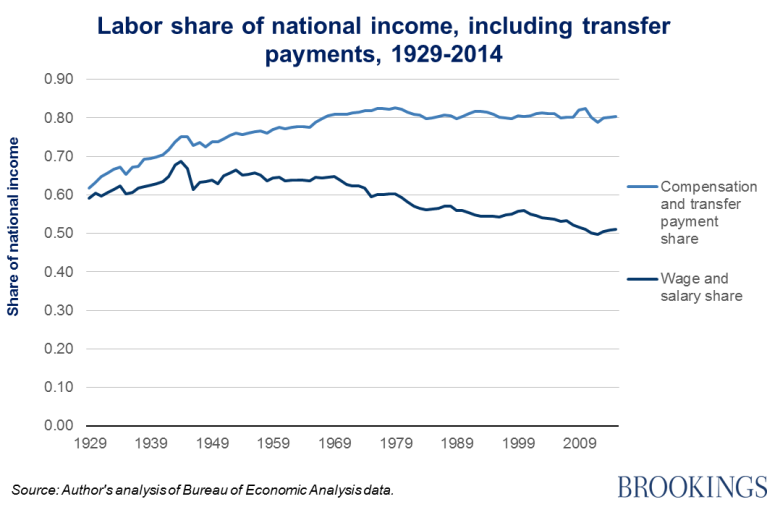 As for the claims that elite earnings are driven by advanced skills and IQ, Rothwell states, “It is certainly true that rising relative returns to education have driven up inequality. But as I have written earlier, this is true among the bottom 99 percent. There is no evidence to support the idea that the top 1 percent consists mostly of people of “exceptional talent.” In fact, there is quite a bit of evidence to the contrary.” Finally, while some entrepreneurs grow rich by founding an innovative technology, the rich are most often found in the doctor’s office. “No industry has more top earners than physicians’ offices, with 7.2 percent. Hospitals are home to 7 percent. Legal services and securities and financial investments industries account for another 7 and 6 percent, respectively. Real estate, dentistry, and banking provide a large number, too.”

So what is leading to inequality according to Rothwell?

One way that the top 1 percent cements their position is by occupying the financial sector, and accessing above-market returns on their investments…The accredited investor rule has mostly been ignored by scholars of inequality. But legal scholars Houman Shadab, Usha Rodrigues, and Cary Martin Shelby are an exception. They have each written persuasively about how the rules contribute to inequality by giving the richest investors privileged access to the best investment strategies. Shadab points out that other countries (with less inequality) allow retail investors to access hedge funds. The law has also inflated the compensation of hedge fund workers—roughly $500,000 on average—by restricting competition. Mutual funds—which charge tiny fees by comparison—are currently barred from using hedge fund strategies because they have non-rich investors. If the law was changed to allow mutual funds to offer hedge fund portfolios, hundreds of billions of dollars would be transferred annually from super-rich hedge fund managers and investment bankers to ordinary investors, and even low-income workers with retirement plans.

But that’s not all.

At the same time, we need more competition at the top end of the labor market. As economist Dean Baker points out, politicians and intellectuals often champion market competition—but what they mean by that is competition among low-paid service workers, production workers, or computer programmers who face competition from trade and immigration, while elite professionals sit behind a protectionist wall. Workers in occupations with no higher educational requirements see their wages held down by millions of other Americans denied a high-quality education and competing for relatively precious vacancies. For lawyers, doctors, and dentists— three of the most over-represented occupations in the top 1 percent—state-level lobbying from professional associations has blocked efforts to expand the supply of qualified workers who could do many of the “professional” job tasks for less pay.

Ultimately, Rothwell suggests that we increase the competition for the top 1 percent.

Before Marx, Adam Smith provided a framework for political economy that is especially useful today. Smith warned against local trade associations which were inevitably conspiring “against the public…to raise prices,” and “restraining the competition in some employments to a smaller number than would otherwise…occasion a very important inequality” between occupations. For earnings to be distributed more fairly, our goal is not to stand in the way of markets, but to make them work better.

1 thought on “How to Deal With the Top 1%: Competition”