Five cars for the Indian market were recently awarded a zero-star safety rating by the London-based Global New Car Assessment Program. While this low rating is gaining a bit of negative press, economist Alex Tabarrok thinks we should reconsider:

Let’s take a closer look. These cars are very inexpensive. A Renault Kwid, for example, can be had for under $4000. In the Indian market these cars are competing against motorcycles. Only 6 percent of Indian households own a car but 47% own a motorcycle. Overall, there are more than five times as many motorcycles as cars in India.

Motorcycles are also much more dangerous than cars. 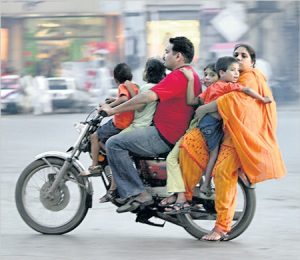 …The GNCAP worries that some Indian cars don’t have airbags but forgets that no Indian motorcycles have airbags. Even a zero-star car is much safer than a motorcycle. Air bags cost about $200-$400 (somewhat older estimates here a, b, c) and are not terribly effective. (Levitt and Porter, for example, calculated that air bags saved 550 lives in 1997 compared to 15,000 lives saved by seatbelts.) At $250, airbags would increase the cost of a $5,000 car by 5%. A higher price for automobiles would reduce the number of relatively safe automobiles and increase the number of relatively dangerous motorcycles and thus an air bag requirement could result in more traffic fatalities.

A broader point is that in India today $250 is about 5% of GDP per capita ($5,700 at PPP) and that’s a high price to pay for the limited protection provided by an air bag. Lots of people in the United States wouldn’t pay $2750–5% of US GDP per capita–for an air bag. Why should Indians be any different?

Intending to save lives and actually saving lives are not the same thing.