I’m anti-abortion, and this meme really annoys me:

This meme is addressed to pro-lifers, but it only makes sense if it completely ignores the fundamental pro-life argument: abortion kills non-aggressive, innocent humans. To a pro-lifer this meme is roughly equivalent to “Don’t like murder? Don’t commit one.” Yeah great. Solid point.

Now, an abortion rights advocate might respond that abortion isn’t murder for a variety of reasons, and then we can have that debate. That debate is worth having because it’s actually addressing what the target audience–pro-lifers, in this case–are saying. The above meme completely ignores what pro-lifers are saying. What good is a point that ignores the central premise of the group you’re addressing?

And that’s why, even though I’m a gun rights advocate, this meme annoys me too: 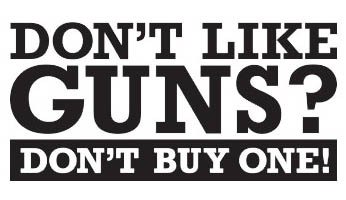 I know gun rights advocates, including myself, argue that access to guns can and has saved lives. And I think that’s a debate worth having because it’s addressing what the target audience–gun control advocates, in this case–are saying. But the above meme completely ignores what they’re saying, in the exact same way the abortion meme did.

I understand memes by their very nature can’t be in-depth, nuanced arguments. But they could at least be remotely relevant to the audience they’re supposed to be addressing. That’s not too high of a hurdle, right?