A recent article in The Wall Street Journal describes “The Rise of Zero-Sum Economics” among both political parties:

[Trump] sees [trade] not as a form of cooperation where everyone wins but a contest where someone must lose for someone to win. “We already have a trade war, and we’re losing badly,” he declared last month.

It’s not just Mr. Trump who has embraced economics as a bleak zero-sum game; so have Democratic activists. Their platform this year calls the economy “rigged” in favor of the 1%, at the expense of everyone else.

In shifting their attention from how income grows to how it’s divided, the parties think they’re catering to reality.

However, this seems to be out of touch with most voters: 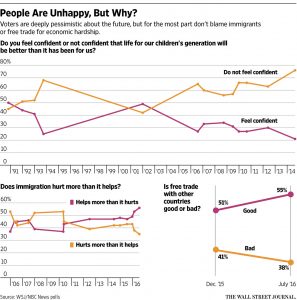 Yet less trade and less legal immigration will hurt U.S. growth and the average worker, not help them. Moreover, the median voter seems to get that: Net support for free trade is solidly positive, according to the latest WSJ/NBC News poll, while support for immigration among Democrats and independents is growing (it remains low among Republicans). Voters worry far less about inequality than whether they personally are getting ahead financially.

That is the irony: In a year when both parties are rallying their partisans by portraying the economy as a win-lose proposition, most Americans still think it’s win-win.

1 thought on “The Rise of Zero-Sum Economics”