AEI’s Robert Doar highlights a fairly new review in The New York Review of Books that, in Doar’s estimate, “provides two very strong caveats” to the some of the recent claims by sociologists Edin and Shaefer “that some single parent families are dramatically worse off than they were before the passage of the 1996 welfare reform legislation, which replaced a federal entitlement to cash welfare (AFDC) with a block grant to states to implement work-focused cash assistance programs (TANF).” Harvard’s Christopher Jencks (the review’s author) points out that

estimates of extreme poverty change when they treat the value of EITC refunds, food stamps, and rent subsidies like income. The second row of Table 1 shows that including these resources reduces the estimated prevalence of extreme poverty among households with children from 1.7 to 1.1 percent in 1996 and from 4.3 to 1.6 percent in 2011. Because the reduction is so much larger in 2011 than it was in 1996, the increase in extreme poverty between 1996 and 2011 falls from 2.6 to 0.5 percentage points. In other words, the growth of EITC refunds and noncash benefits offsets about four fifths of the decline in extremely poor families’ pretax money income between 1996 and 2011. 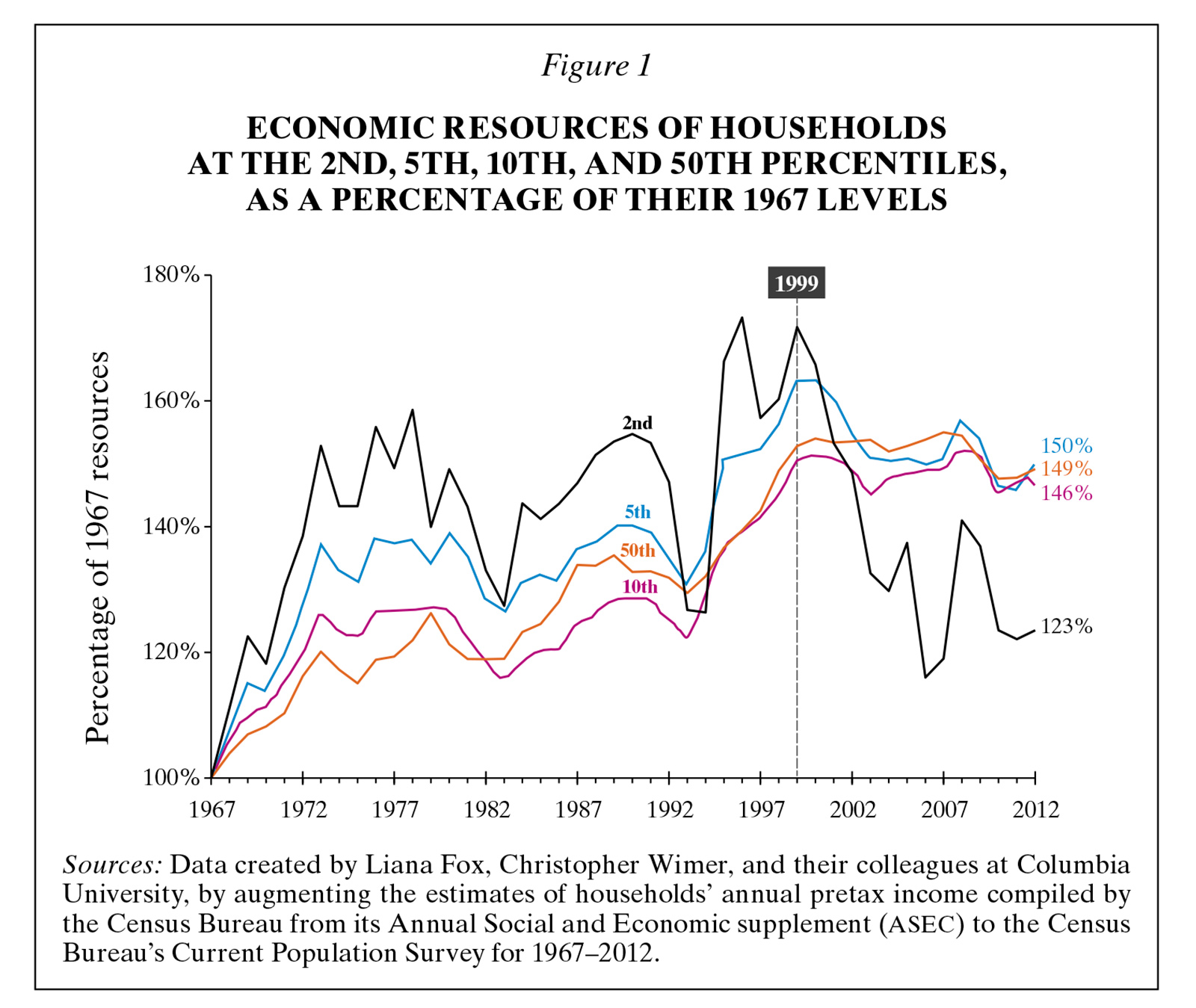 Doar expounds, “Edin and Shaefer acknowledge that they focus only on “cash” income and they argue that vouchers which pay for food or housing are not cash, and don’t cover all the needs of a family.  But for most readers of their book, and certainly for all of those who just hear the headline about families living on $2 a day, the distinction goes unnoticed: Living on $2 a day means that is all they have to purchase food and housing.  That is, after all, what it customarily means when used in the developing world context from which Edin and Shaefer drew the statistic.” Jencks’ second caveat is summed up as follows:

All this makes Doar suspicious: “Could it be that the small increase in extreme poverty was caused by the bad economy in the wake of the Great Recession? Did the fact that federal policymakers decided against incorporating strong work requirements in their expansions of assistance programs affect this in any way? Is it possible (if not likely) that the increase is due in part to more underreporting of income on surveys such as the one used by Edin and Shaefer?” Jencks is also skeptical, concluding that the claim about welfare reform “is not the kind of speculation that can be either verified or refuted; but it is worth serious consideration nonetheless.”

All of this demonstrates why consumption is a superior metric for measuring the economic well-being of the poor. A Brookings report from a couple years ago found that when measured for consumption, virtually no one in the United States lives on $2 a day.1Poverty in the U.S. has declined substantially since the 1960s with major material gains for the poor and middle class. While there is still much to do, accurately assessing the situation is necessary in order to determine what steps to take next.