In the first half of 2010, Peter Drucker’s 1973 book Management: Task, Responsibilities, Practices sold over 300,000 copies in Japan. When compared to the 100,000 copies sold in the previous 26 years, the leap is pretty remarkable. “The unlikely catalyst for this cultish enthusiasm,” explains The Economist, “is a fictional teenager called Minami. Like many high-school girls in Japan, she becomes the gofer for the baseball team’s male coach. Unlike many of her compatriots, she is the kind of girl, as the book says, who leaps before she looks. Horrified by the team’s lack of ambition, she sets it the goal of reaching the high-school championships. She stumbles upon Drucker’s 1973 book, and it helps her turn the rabble into a team.” Minami is the main character of a popular 2009 Japanese novel entitled (in English) What If the Manageress of a High School Baseball Team read Drucker’s “Management”?, or Moshidora for short. A manga adaptation was launched in late 2010, while the film adaptation was released in 2011. I have yet to track down a copy of the novel or manga, though my, shall we say, less-than-stellar Japanese would be of no help when reading them. Furthermore, the movie wasn’t exactly Best Foreign Language Film material. However, the 10-episode anime TV series that aired in 2011 was quite good and actually captured what I love about management, management literature, and Drucker’s work in particular. 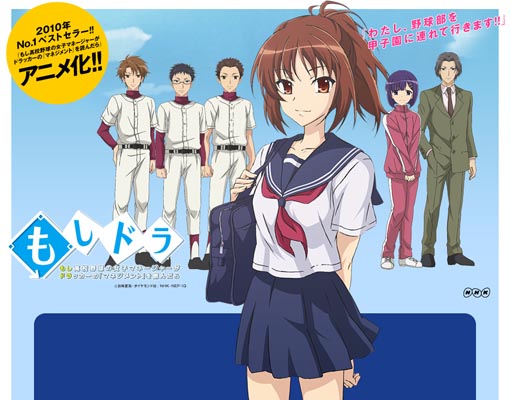 Episode 5 (“Minami Abandons Traditional High School Baseball”) stood out the most to me because it was able to demonstrate the principle of growth, the spirit of which can be applied personally from business to sports to spirituality. After Minami discovers the concept of “innovation” in Episode 4 and encourages the team’s coach to revolutionize high school baseball by means of it,1 Coach Makoto implements a “no bunt, no ball” strategy: in order to reduce the pitcher’s time on the field and increase defense, the pitcher throws only strikes. Sacrifice bunts are also eliminated, upping the chance of runs without taking an out. The team tests their new strategy at an exhibition game against a college team (whose players are on the national level). After the college team gains a 10-run lead, the strategy looks as if it is a failure. However, Minami realizes that her team’s pitch count and number of field mistakes are decreasing with each inning (they had cut it in half by the time Minami noticed). During the final inning, Minami’s team prevents their rival from scoring and gets their only two runs of the game. Even though the score was 34-2 (and ended early due to the mercy rule), Minami and her team were thrilled. Their strategy had resulted in significant growth and development, even within the course of one game. On the surface, the strategy looked like a failure. But in the long run, it took the team to the National Championship.

I was reminded of this during Marvin J. Ashton’s talk “Who’s Losing?“:

One warm evening during the past summer months Sister Ashton and I enjoyed a professional baseball game. During the early part of the competition our attention was diverted from the action by a late arriver. As he walked by, he spotted me and asked, “Who’s losing?” I responded with, “Neither one.” Following my answer, I noticed that he glanced at the right-field scoreboard, saw the game wasn’t tied, and walked on, undoubtedly wondering about me.

Seconds after he made his way to a distant seat, Sister Ashton said, “He doesn’t know you very well, does he?” “What makes you say that?” I replied. She responded with, “If he did, he would know you don’t believe anyone is losing. Some are ahead and some are behind, but no one is losing. Isn’t that right?” I smiled in approval with a warm feeling inside.

He goes on to remind us that we are “not losing if we are moving in the right direction.” He encourages us to have “good cheer, optimism, and courage if we are to move onward and upward.” He says we “need men with the courage to put proper attitudes into action. We need more men today with patience and purposeful endurance.” We need “resilience, the ability to cope with change. Adaptability cushions the impact of change or disappointment. Love can be a great shock absorber as we adjust in trial and tragedy.” He states, “Proper self-confidence lets every man know there is a spark of divinity within waiting to be nurtured in meaningful growth. Proper attitude enables us to live in harmony with our potentials.” He also lets us know that “[p]roper attitude toward self is an eternal pursuit. Positive personal attitude will insist that we deliver our best, even though less might seem adequate for the moment. Proper attitude demands we be realistic—even tough with ourselves and self-disciplining.”

All of this is about progress; it’s a process, a transformation. I’m reminded of something Nathaniel wrote years ago:

The reality is this: if we are sincere in our quest to be disciples of God, we will lose a taste for things that are not Celestial. It’s unnecessary and unhelpful to lash ourselves into a frenzy to try and vault to perfection in one leap. We lack the sensitivity to even know what that means. It would be like trying to waltz without proprioception: futile, grotesque, and ultimately expressing a lack of faith and a lack of humility. We are telling God: “You are not working in me fast enough.”

Let God work on you. Embrace the process and take notice of the small wins throughout your progression.