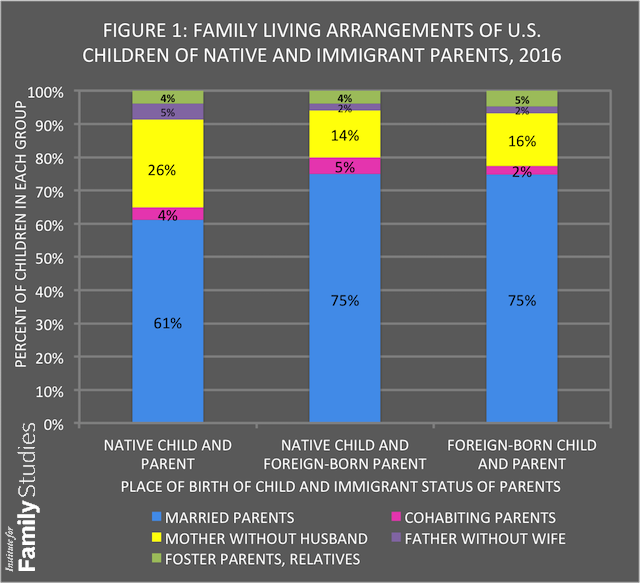 Take a hard look at the graph above. I’ve discussed marriage and family structure a lot here at Difficult Run. The social science is pretty clear: marriage matters for children’s well-being. Concerns over immigration often revolve around culture: do immigrants assimilate well? What kind of foreign cultural elements are they bringing with them? I’ve addressed cultural diversity before. And according to the data above, intact families are yet another positive contribution made by immigrants. According to researcher Nicholas Zill,

Indeed, the latest data from the Census Bureau on the family living arrangements of U.S. children show that 75 percent of immigrant children live in married-couple families, compared to 61 percent of children of U.S.-born parents. The figure is the same for immigrant children who were born in this country as for those who were foreign-born.4 Children of immigrants are less likely than native children to be living with divorced, separated, or never-married mothers: 14 percent lived with their mothers only, compared to 26 percent of children of U.S.-born parents.

Zill concludes that “we should…recognize the strong work ethic and robust family values that many immigrant families exemplify. Far from undermining our traditions, they may be showing us the way to “make America great again.””1