but it’s one of the best tools the federal government has for fighting poverty. It functions as a wage subsidy for the working poor, providing an average of $2,982 a year to families with children come tax season. The results are impressive. According to the Census Bureau, refundable tax credits like the EITC and the similarly structured Child Tax Credit cut the poverty rate (correctly measured) by 3 percentage points in 2013 — that’s 9.4 million people kept out of poverty.

But a [2015] study suggests that even that is an underestimate. UC Berkeley economist Hilary Hoynes and the Treasury Department’s Ankur Patel find that the EITC might be twice as effective at fighting poverty as the census estimate suggests.

Hoynes and Patel focus on the credit’s effect on single women with children, the single biggest group of recipients. It’s well-known that the EITC encourages nonworking single moms and dads to enter the workforce; an analysis by the Center on Budget and Policy Priorities found that EITC brought more single mothers into the workforce in the 1990s than welfare reform did. That means that it boosts income not just by giving people money, but by getting people to work more and bring in more in wages. These increased wages can reduce income in other ways, such as by making people ineligible for programs like food stamps, but on the whole it boosts pay.

Hoynes and Patel find that bringing this effect into the analysis doubles the number of people lifted out of poverty by the EITC. The expansion of the EITC included in Bill Clinton’s 1993 budget reduced the share of people under the poverty line by 7.9 percent. That’s much more than you’d find in an analysis that doesn’t take the EITC’s effect on employment into account. 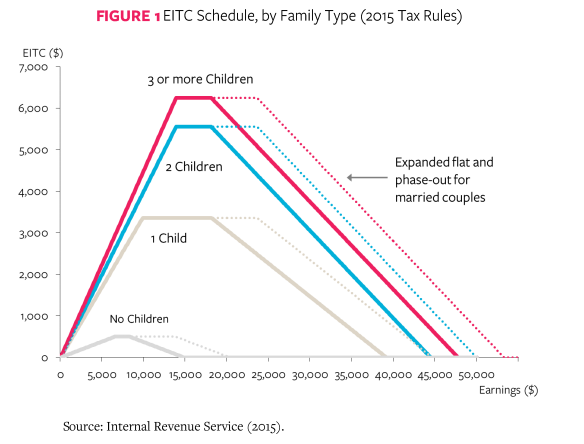 Hoynes nicely summarizes these findings in a 2016 policy brief. In short,