Recently I was talking with friends about whether “mainstream media” (the TV, radio, and print media most commonly consumed by people) has an overall bias for leftist viewpoints. One of my friends countered that everyone is more likely to notice bias against their own viewpoints than against the other side’s, and that he has often felt the media was too favorable to the right-wing point of view. Since we were simply swapping anecdotes and personal perceptions, I offered three pieces of information to suggest the media is in fact left-biased: 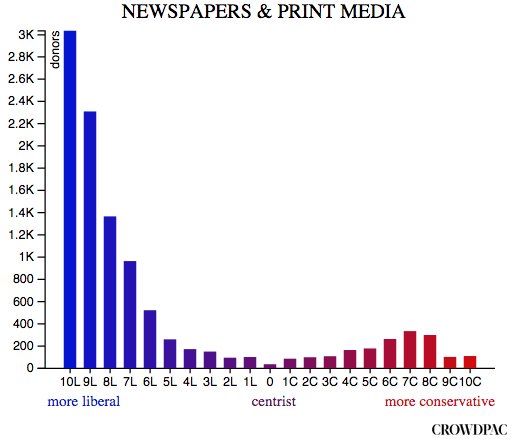 Some of my friends countered that (1) conservative media strongly pushes the narrative that all others (“mainstream media”) are liberal biased, so that could influence conservatives to be more skeptical, and (2) just because reporters are liberal doesn’t mean they will report with bias. One friend linked me to a study by the progressive, left-leaning policy group FAIR which found that major newspapers, TV, and radio tend to cite centrist think tanks most often, followed by right-leaning think tanks, with left-leaning think tanks coming in last. The idea is that if the media were biased for liberal viewpoints, left-leaning think tanks ought to be cited more often than others, and apparently that’s not the case.

However, the FAIR study relies on FAIR’s evaluation of how left- or right-leaning a think tank is. Given FAIR is a progressive, left-leaning organization, this methodology gave me pause.

Here is a study of media citations of think tanks done slightly differently: the authors did not themselves evaluate whether a think tank was left- or right-leaning. As they describe it:

A feature of our method is that it does not require us to make a subjective assessment of how liberal or conservative a think tank is. That is, for instance, we do not need to read policy reports of the think tank or analyze its position on various issues to determine its ideology. Instead, we simply observe the ADA scores [based on voting records] of the members of Congress who cite it. This feature is important, since an active controversy exists whether, e.g., the Brookings Institution or the RAND corporation is moderate, left-wing, or right-wing.

Under this method, the researchers found a “strong liberal bias” in think tank citation for all outlets they examined except (surprise to no one) Fox News and Washington Times.

But even considering that, I’m not sure how much insight we get from looking at think tank citations. It’s better than no information, but what proportion of news stories even involve citing think tanks?

Instead, here’s a piece from Public Opinion Quarterly that looks at a lot of aspects of media beyond policy groups. The authors conclude that, with the exception of coverage of Republican and Democrat scandals, outlets don’t have a huge divide on how they cover descriptive news (as distinct from opinion pieces).

But notice in particular Figures 2 and 4. In Figure 2 you can see that all the news outlets except Fox produce more left-leaning articles than right-leaning articles (I’m not counting Daily Kos or Breitbart because I don’t think, and neither did these authors, that those are “mainstream” news sources).

The authors rightly point out that there aren’t huge divides on either of these metrics, but on the aggregate it still means nearly all outlets produce net-left-biased content, and I think it has a pretty pervasive additive effect.

And this research was only looking at ideological slant in terms of whether articles were positive or negative toward members of the Democratic or Republican parties. That is valuable information, but I also think that tends to be more obvious bias. I think the aggregate industry-level bias includes obvious bias, sure, but I think it’s more common that bias is more subtle. I would particularly be interested in exploring (1) which stories an outlet chooses to focus on versus others and (2) how they choose to frame issues (as opposed to how they talk about Republicans vs Democrats).

The Public Opinion Quarterly research tried to address #1 by looking at how often different outlets covered different broad categories of topics (and they didn’t find large differences across outlets), but I don’t think that addresses the concern. For example, I have not seen people accuse one outlet or another of just not talking about abortion. It’s about which abortion-related stories they cover and how they talk about the issue. The great reluctance of most outlets to talk about the Kermit Gosnell scandal is a prime example of this. It’s my impression that a whole lot more people have heard of Dr. Tiller, the abortion provider who was murdered by a gun man, than have heard of Dr. Gosnell, the abortion provider who snipped the spinal cords of newborns and was found guilty of murder.

And that doesn’t even get into more subtle language differences, like “pro-choice” versus “anti-abortion” or, worse, “anti-choice,” or like describing a pro-life walk that draws hundreds of thousands of people as being comprised of “thousands,” a downplay of two orders of magnitude. Those are very small details, right? But they add up, and I don’t know of any research that measures this or even how it could–although I think Gallup kind of touched on it when they found that almost everyone, including pro-lifers, underestimated how many Americans are pro-life.

I don’t think the topic of abortion is the exception here. And I think the aggregate bias is pretty clear to, well, most people who aren’t Democrats/leftists. Perhaps you can dismiss the frequent conservative suspicion of the mainstream media as conservatives all being duped by conservative media, but that doesn’t explain why independents have shown similar levels of distrust, or why more than six-in-ten Democratic and independent voters believed most journalists were “pulling for Obama” in 2008.