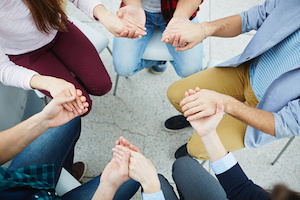 [T]here might be a secret weapon in the fight against addiction: helping people.

While other researchers look for ways to improve prescription drug regimens or talk therapies, Maria Pagano of Case Western University has focused her attention on the addict’s social connections. In studies spanning over a decade, she and her colleagues have shown that having a supportive network, reducing isolation, decreasing social anxiety, and—especially—helping others can increase the chances of staying sober by up to 50 percent. Her findings suggest that addiction should not be characterized solely as a failure of individual willpower, but must be viewed through the lens of positive social connection.

…In one 2012 study, Pagano and her colleagues found that having a network of people who support one’s abstinence can significantly impact an addict’s ability to stay sober up to three years later…But finding a positive social network when you’re an addict is not that easy to do, she says. Many addicts report having social anxiety—a feeling that one is onstage and not approved of by those around them. In fact, social anxiety often leads one to try drugs or alcohol in the first place, since people think intoxicants act as social lubricants. But using drugs for anxiety control can lead to dependence and can easily get out of control, ruining one’s health, relationships, and work life.

…In a recent study in which she tested this theory, she found that many of her participants—adolescents in treatment for addiction, ages 14-18—had a deep fear of being scrutinized in social situations, while 15 percent met the diagnostic criteria for a social anxiety disorder (or SAD). While her results showed that levels of participation in a 12-step program did not differ significantly between those with an SAD diagnosis and those without one, one thing did make a difference: The adolescents with SAD who actively participated in helping had a significantly reduced risk of relapse or incarceration in the six months after their treatment finished.

…In one 2013 study, she and her colleagues recruited 226 recovering alcoholics from nine outpatient treatment programs, and they followed these patients for 10 years while measuring alcohol consumption, AA participation levels, and self-rated thoughtfulness towards other people at different points in time. They also measured whether or not participants helped others by becoming a sponsor or by completing step 12 in AA.

By using statistical analyses, Pagano and colleagues showed that those who’d attended more AA meetings and engaged in helping stayed sober longer and reported higher interest in others up to 10 years later. Helping others had a unique effect on the outcome, suggesting that helping has a special role in recovery—and should receive more attention.

The article continues with even more studies demonstrating the importance of social connections and service in combating addiction. Well worth the read.