Retirement may not be all it’s cracked up to be. A MarketWatch article reports,

More retirees than ever say they are “not at all satisfied” with retirement, according to a study published this year from the Employee Benefit Research Institute. The institute used data from the University of Michigan’s Health and Retirement Study, collected from 1998 to 2012, in which more than 20,000 people are interviewed every two years.

The study authors did not investigate the reasons behind these satisfaction dips, but other studies suggest that some of the reasons may be financial. Research published in 2004 by Constantijn Panis, who has a Ph.D. in economics and is also an expert in demographic issues, found that getting payouts from a pension was positively related to retirement satisfaction. But as the number of retirees drawing on traditional pensions declined — from 1980 to 2008, the proportion of non-government, salaried workers who got a traditional pension fell from 38% to 20% — retirement satisfaction may be dipping accordingly.

…Studies show that today’s retirees want more and varied activities in retirement, including flexible jobs, than did previous generations of retirees. Plus, surveys show that boomers — who are retiring in droves in recent years — are in general less happy than members of the so-called silent generation, and that may be reflected in these numbers. 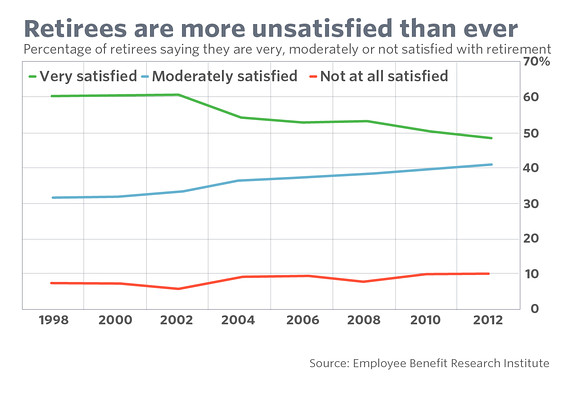 Of course, it’s worth noting that the overwhelming majority report being satisfied with retirement. We shouldn’t create a crisis where there is none. Nonetheless, the uptick may be something we want to keep an eye on. In the Gallup-published Wellbeing: The Five Essential Elements, the authors Tom Rath and Jim Harter explore five elements to overall well-being:

In regards to Career Wellbeing, Rath and Harter reveal this significant point about the need to work:

One of the more encouraging findings [of one study] was that, even in the face of some of life’s most tragic events like the death of a spouse, after a few years, people do recover to the same level of wellbeing they had before their spouse passed away. But this was not the case for those who were unemployed for a prolonged period of time — particularly not for men. Our wellbeing actually recovers more rapidly from the death of a spouse than it does from a sustained period of unemployment. This doesn’t mean that getting fired will harm your wellbeing forever. The same study also found that being laid off from a job in the last year did not result in any significant long-term changes. The key is to avoid sustained periods of unemployment (more than a year) when you are actively looking for a job but unable to find one. In addition to the obvious loss of income from prolonged unemployment, the lack of regular social contact and the daily boredom might be even more detrimental to your wellbeing.

This is likely why the MarketWatch article encourages retirees to “find things you love to do” and “plan how to use your time.” Wise advice.