Vox covers the unsurprising results of a new study regarding political bias:

If you ever thought, “You couldn’t pay me to listen to Sean Hannity / Rachael Maddow / insert any television pundit you violently disagree with here” — you are not alone.

A study, recently published in the Journal of Experimental and Social Psychology,essentially tested this very question.

Two hundred participants were presented with two options. They could either read and answer questions about an opinion they agreed with — the topic was same-sex marriage — or read the opposing viewpoint.

Here’s the catch: If the participants chose to read the opinion they agreed with, they were entered into a raffle pool to earn $7. If they selected to read opposing opinion, they had a chance to win $10.

A majority — 63 percent — of the participants chose to stick with what they already knew, forgoing the chance to win $10. Both people with pro same-sex marriage beliefs and those against it avoided the opinion hostile to their worldview at similar rates.

…This is a key point that many people miss when discussing the “fake news” or “filter bubble” problem in our online media ecosystems. Avoiding facts inconvenient to our worldview isn’t just some passive, unconscious habit we engage in. We do it because we find these facts to be genuinely unpleasant. And as long as this experience remains unpleasant, and easy to avoid, we’re just going to drift further and further apart.

Similarly, the researchers found that “[l]istening to a political opponent isn’t as awful as getting a tooth pulled, but it’s trending in that direction. It’s certainly a lot more awful than taking a leisurely stroll.” 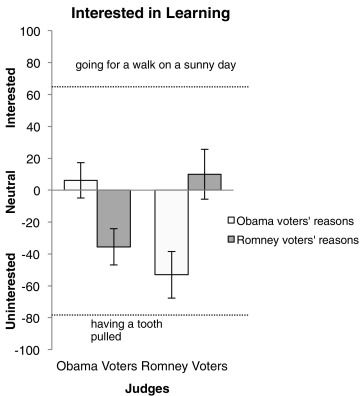 What’s worse is that “partisans were unfamiliar with [the opposing side’s] viewpoints. So it’s not the case that people are avoiding learning about the other side because they’re already familiar. What’s going on here is “motivated ignorance,” as Matt Motyl, one of the study co-authors calls it.” Vox laments,

This is the dark truth that lies at the heart of all partisan politics, and makes me pessimistic that Facebook or any other social networking site can really solve the problem of people filtering into their own content bubbles. We automatically have an easier time remembering information that fits our worldviews. We’re simply quicker to recognize information that confirms what we already know, which makes us blind to facts that discount it. It’s the reason why that — paradoxically — as we learn more about politics and politically charged issues, we tend to become more rigid in our thinking.

Just more evidence that politics makes us mean and dumb. Here are a few useful steps to help you escape your political echo chamber:

1 thought on “Basking in Motivated Ignorance”