The Handmaid’s tale as a TV show is apparently a big deal. I don’t know about that. I really liked the book when I read it a few years ago, but I dreaded it being made for TV and haven’t checked the show out. Anyway, because the show is a big deal, I see lots of references to it on Facebook. Here’s one that stood out:

Better never means better for everyone. It always means worse for some.

The line is from the book, and it made it into the show, too. Of course it did.

The sentiment is very, very far from unique. In fact, it’s pretty close to universal among the left-wing of American politics. It’s actually pretty common on the right, too, since it’s more about populism than it is about left/right ideology. It crops up all the time. Just as one more example, here’s another left-leaning author in another overtly ideological (but not nearly as aesthetically accomplished) book1:

So, that’s one theory of human existence: in all of our history (and for hundreds of years into our imagined future) progress for everyone is impossible.

On the other hand, here’s the reality2: 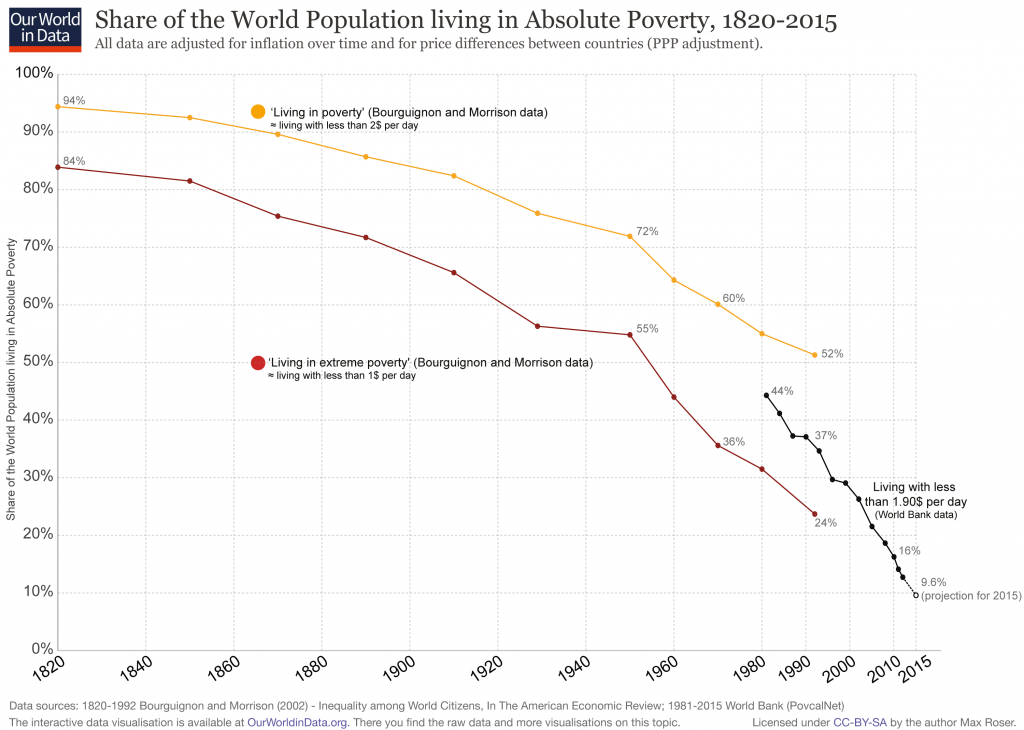 The chart comes from Our World in Data’s article on extreme poverty.

I understand the idea of living in a fantasy world if the fantasy is better than reality. I can even understand extending this wishful thinking to fantasies that don’t actually seem very nice. That’s what conspiracy theories are all about, after all. Some people would rather believe in a world where things happen for a reason (and that reason is the Illuminati) rather than believe in a world where things are pretty random and chaotic because the Illuminati running everything is less scary than nobody running anything. OK. Not my cup of tea, but OK.

What I don’t understand is choosing to live in fantasy world that is so much grimmer than reality for no discernible benefit.

Which makes you wonder: what motivates this belief–contradicted by all available evidence–that universal improvement is impossible?

1 thought on ““Better never means better for everyone””