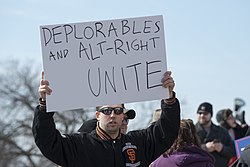 The [alt-right] is disorganized and mostly anonymous, making it difficult to study systematically, and until recently its definition was up for grabs. Throughout 2016, the term “alt-right” was often applied to a much broader group than it is today; at times, it seemed to refer to the entirety of Trump’s right-wing populist base. Since the U.S. presidential election, however, the alt-right’s nature has become clearer: it is a white nationalist movement that focuses on white identity politics and downplays most other issues. As the alt-right’s views became better known, many people who had flirted with the movement broke ranks, leaving it smaller but more ideologically cohesive.

Some have argued that the alt-right is simply the latest iteration of an old, racist strain of U.S. politics. And indeed, as a white nationalist movement, the alt-right’s ultimate vision—a racially homogeneous white ethnostate—is similar to that of earlier groups such as the Ku Klux Klan, the Aryan Nations, and the National Alliance. Yet the alt-right considers itself new and distinct, in terms of both style and intellectual substance. Stylistically, it has attempted to distance itself from the ineffectual violence and pageantry of what it derisively calls “white nationalism 1.0,” instead preferring a modern aesthetic that targets cynical millennials on social media and online message boards. And ideologically, the movement represents a break from American racist movements of the past, looking not to U.S. history but to the European far right for ideas and strategies.

White nationalists like Richard Spencer draw on ideas from the European New Right:

The ENR first emerged in France in the late 1960s, at a time when the radical left was at its apogee and the country looked to be on the brink of revolution. In 1968, a group led by the young right-wing journalist Alain de Benoist founded the Research and Study Group for European Civilization (known by its French acronym, GRECE). This new think tank sought to provide a philosophical foundation for a new political order, one that rejected liberalism, communism, and the excesses of fascism.

The ENR was an unusual amalgamation of ideas from the beginning. Although it repudiated fascism and Nazism, the ENR drew inspiration from many of the same intellectual sources. Particularly important to the ENR were the so-called conservative revolutionary writers of Weimar-era Germany, including the legal theorist Carl Schmitt and the historian Arthur Moeller van den Bruck. Like these figures, the ENR envisioned a new path for Europe that rejected both Soviet communism and Anglo-American liberalism.

The ENR flirted with, but eventually rejected, a politics based on overt racism. Instead, the movement grounded its arguments in culture. ENR thinkers rejected the idea that all human beings are generally interchangeable and posited instead that every individual views the world from a particular cultural lens; inherited culture, that is, is a vital part of every person’s identity. They further argued that all cultures have a “right to difference,” or a right to maintain their sovereignty and cultural identity, free from the homogenizing influence of global capitalism and multiculturalism. The right of cultures to preserve their identity in turn implied their right to exclude or expel groups and ideas that threatened their cohesion and continuity.

…Yet the ENR also used left-wing theories and rhetoric. It adopted the New Left’s opposition to global financial capitalism and borrowed arguments about cultural particularity from anticolonial movements, concluding, for instance, that European colonial projects had been a mistake and that the United States was trying to Americanize every corner of the globe, destroying distinct cultures along the way. The ENR even supported anti-American populist uprisings in the Middle East, Asia, and Africa…The ENR was also strongly influenced by the Italian Marxist Antonio Gramsci, whose views on metapolitics and cultural hegemony contended that a political philosophy will attain lasting power only after it has won the battle of ideas, at least among elites. The ENR was pro–environmental conservation, as well.

Mainstream American conservatism paid no attention to the ENR, while even the “radical right in the United States…showed little awareness of the ENR until quite recently. This was also understandable, given the language barrier—the writings of de Benoist and others were mostly untranslated—and the ENR’s lack of interest in U.S. domestic politics. De Benoist’s careful avoidance of transparent racism also put him at odds with white nationalists in the United States, who wore their racism on their sleeves…Institutions affiliated with the alt-right are now working to translate books from ENR thinkers into English. The publishing company Arktos Media has put out a large catalog of these translations and is now part of the recently formed AltRight Corporation, which has become a significant hub of alt-right propaganda. Arktos has published works by de Benoist and Faye, the French-German ENR ideologue Pierre Krebs, and earlier right-wing radicals such as the Italian philosopher Julius Evola.”

Hawley notes that “it would be an exaggeration at this point to speak of a unified, global far-right movement. Yet members of the radical right on both sides of the Atlantic are increasingly adept at borrowing each other’s ideas and learning from each other’s successes and failures. Those who study these phenomena must maintain an international perspective. If a right-wing idea, tactic, or meme proves successful in one context, it will probably appear in others.”