The question and title of a brand new NBER working paper. The authors find (according to the earlier, ungated version) that “the relative interstate migration rate of state-specific licensed occupations is 36 percent lower than that of others” (pg. 16). The authors explain,

We compared the relative within- and between-state migration rates of members of 22 licensed occupations to those of others using data from the American Community Survey. Our empirical strategy compared the relationship between licensure and migration between states and a far distance within state, which controls for unobservable characteristics that influence the propensity of licensed occupations to move out of their local area. First, we found that that migration across states for licensed individuals is reduced, but the size of reduction varies across occupations. Quasi-nationally licensed occupations do not show any limitations on their interstate geographic mobility. Second, using a causal model we find evidence using the reciprocity agreements for lawyers that the adoption of these agreements increases migration of lawyers into a state.

Economists have long held that restrictions on geographic mobility limit the ability of the labor market to operate efficiently. Within this context, occupational licensing provisions that restrict job entry through interstate migration could also be a barrier to economic opportunity and labor market efficiency. Specifically, the paper has empirically examined whether occupational licensing statutes limiting occupational entry from other states influence interstate migration.

…Our analysis examines the migration of individuals. For many, migration is not an individual decision; instead, it is a choice made on the basis of overall household or family well-being. As our analysis is limited to individuals we observe in an occupation after their move, we miss a potentially important effect of licensure on those making interstate moves: individuals who are forced out of an occupation or of the labor force entirely as a result of moving between states. An example is so-called “trailing spouses”, who move based on their partner getting a better job in another state, and if they were in a licensed occupation prior to the move, may have to switch careers as a result. The effect of licensure on career changes or labor force exits made as a result of household migration is potentially important, and as we cannot identify individuals affected by these phenomena in the ACS, we leave their analysis for future research (pgs. 27-28).

Or, as one of the researchers summarizes in a previous paper,

Johnson and Kleiner’s (2015) more comprehensive analysis of…licensed occupations shows that, after controlling for demographic characteristics, individuals in these regulated occupations have lower interstate migration rates than their peers in other occupations, while the rate at which they move within states is similar. To establish whether or not licensing is behind these differences, the authors perform a difference-in-difference analysis using changes in state licensing laws. State policies on accepting those who fulfill licensing requirements in other states as qualified to practice in their state (called endorsement) and on forming agreements with other states on establishing licensing requirements (called reciprocity) are amended often. For example, for lawyers, Johnson and Kleiner find that states that adopt these more flexible policies have higher migration rates compared to states with no such policies. They find that for these…licensed occupations, the additional costs placed on migration have restricted the movement of individuals in licensed occupations, accounting for part of the decrease in overall migration within the United States.

Taken together, these studies on interstate migration support the view that regulation may limit the number of practitioners in a country and that a policy of reducing barriers to interstate migration would provide benefits to workers and consumers. The ability to move across state lines with fewer impediments and have permission to work would allow individuals to more easily go to where there are jobs. This is particularly important because the growth in wage variation may make it more advantageous to move across state lines (Moretti 2012) (pg. 5). 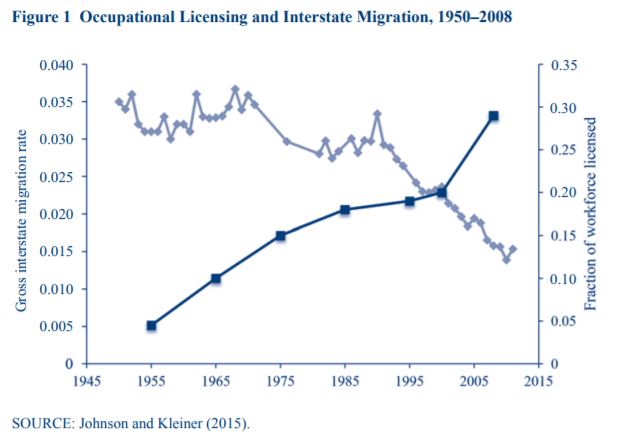 As legal scholar Ilya Somin quipped on Facebook, this is “[a]n extremely important issue that does not get anywhere near as much attention as it deserves. These barriers victimize consumers and also prevent many workers from moving to areas with greater opportunity.”

1 thought on “Is Occupational Licensing a Barrier to Interstate Migration?”