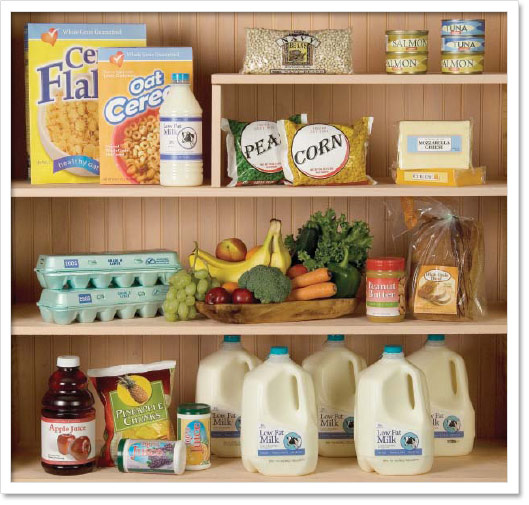 Some of the foods you can purchase through WIC.

There’s good reason to believe that adding nutritional requirements to government food programs is a better use of money and leads to better health outcomes for the people in said programs.

WIC (Women, Infants, and Children) is a state-run program that helps low-income women and children purchase healthy food. WIC has specific guidelines for the quantities and types of food recipients can purchase, all of which have to meet certain health standards. In this program there is no way to purchase soda, candy, pizza, baked sweets, ice cream, etc. SNAP (Supplemental Nutrition Assistance Program, often referred to as “food stamps”) is a federally-funded program helping low-income people purchase almost any food.

The USDA explains that SNAP is for purchasing any food or food product for home consumption and that this definition includes “soft drinks, candy, cookies, snack crackers, and ice cream” and similar items. Data suggest these types of purchases make up at least 17% of SNAP spending .1 In 2017, about 42 million people used SNAP at an average of $125.79 per person per month, meaning the government spent about $11.3 billion that year buying junk food for low-income people. What are the arguments for spending so much on junk rather than using those funds to ensure low-income people have high quality food?

Opponents of SNAP nutritional requirements give many reasons for why nutritional requirements are not feasible or effective: we can’t come up with clear standards for what is “healthy,” it would be too complicated and costly to implement such standards, restrictions wouldn’t stop people from buying unhealthy food with their own money, and people in higher income brackets purchase similar amounts of unhealthy food.2

Yet WIC has managed to define what constitutes healthy food and implement a program based on those boundaries. In fact the USDA describes WIC as “one of the nation’s most successful and cost-effective nutrition intervention programs.” There is evidence to suggest people participating in WIC (especially children) have better nutrition and health outcomes than their peers. Conversely, there is evidence to suggest people who receive SNAP benefits have worse nutrition than income-eligible people who don’t participate in SNAP. For example:

Trends in Obesity Among Participants Aged 2–4 Years in the Special Supplemental Nutrition Program for Women, Infants, and Children – November 2016

The prevalence of obesity among young children from low-income families participating in WIC in U.S. states and territories was 14.5% in 2014. This estimate was higher than the national estimate (8.9%) among all U.S. children in a slightly different age group (2–5 years) based on data from the 2011–2014 National Health and Nutrition Examination Survey (7). Since 2010, statistically significant downward trends in obesity prevalence among WIC young children have been observed overall, in all five racial/ethnic groups, and in 34 of the 56 WIC state agencies, suggesting that prevention initiatives are making progress, potentially by impacting the estimated excess of calories eaten versus energy expended for this vulnerable group (8).

In one study comparing the grocery store purchases of SNAP and WIC households in New England, SNAP households purchased more than double the amount of sugary beverages per month (399 ounces) than WIC households (169 ounces), 72% of which were paid for with SNAP dollars. In a 3-month study, new SNAP participants significantly increased their consumption of refined grains compared with low-income people who did not join. In a study of Hispanic Texan women, SNAP participants consumed 26% more sugary beverages and 38% more sweets and desserts than low-income nonparticipants.

Furthermore, most of the people who use SNAP believe the program should not allow recipients to purchase unhealthy food:

54% of SNAP participants supported removing sugary drinks from SNAP eligibility. In another survey of 522 SNAP stakeholders, 78% of respondents agreed that soda, and 74% agreed that “foods of low nutritional value” such as candy and sugar-sweetened fruit drinks should not be eligible for purchase with benefits. Seventy-seven percent of respondents believed that SNAP benefits should be consistent with the DGAs [Dietary Guidelines for Americans], and 54% thought that SNAP should be reformulated into a defined food package similar to WIC.

I want to live in a society where people are healthy and no one goes hungry. SNAP can and should serve both goals.

2 thoughts on “Should government food assistance programs have nutritional requirements?”