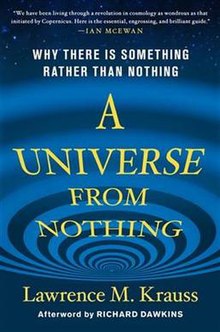 Lawrence M. Krauss, A Universe From Nothing: Why There Is Something Rather Than Nothing (Free Press, 2012): “Bestselling author and acclaimed physicist Lawrence Krauss offers a paradigm-shifting view of how everything that exists came to be in the first place. “Where did the universe come from? What was there before it? What will the future bring? And finally, why is there something rather than nothing?” One of the few prominent scientists today to have crossed the chasm between science and popular culture, Krauss describes the staggeringly beautiful experimental observations and mind-bending new theories that demonstrate not only can something arise from nothing, something will always arise from nothing. With a new preface about the significance of the discovery of the Higgs particle, A Universe from Nothing uses Krauss’s characteristic wry humor and wonderfully clear explanations to take us back to the beginning of the beginning, presenting the most recent evidence for how our universe evolved—and the implications for how it’s going to end. Provocative, challenging, and delightfully readable, this is a game-changing look at the most basic underpinning of existence and a powerful antidote to outmoded philosophical, religious, and scientific thinking” (Amazon).

Daniel M. Cable, Alive at Work: The Neuroscience of Helping Your People Love What They Do (Harvard Business Review Press, 2018): “In this bold, enlightening book, social psychologist and professor Daniel M. Cable takes leaders into the minds of workers and reveals the surprising secret to restoring their zest for work. Disengagement isn’t a motivational problem, it’s a biological one. Humans aren’t built for routine and repetition. We’re designed to crave exploration, experimentation, and learning–in fact, there’s a part of our brains, which scientists have coined “the seeking system,” that rewards us for taking part in these activities. But the way organizations are run prevents many of us from following our innate impulses. As a result, we shut down. Things need to change. More than ever before, employee creativity and engagement are needed to win. Fortunately, it won’t take an extensive overhaul of your organizational culture to get started. With small nudges, you can personally help people reach their fullest potential. Alive at Work reveals:

Filled with fascinating stories from the author’s extensive research, Alive at Work is the inspirational guide that you need to tap into the passion, creativity, and purpose fizzing beneath the surface of every person who falls under your leadership” (Amazon). Newell G. Bringhurst, Saints, Slaves, & Blacks: The Changing Place of Black People Within Mormonism, 2nd ed. (Greg Kofford Books, 2018): “Originally published shortly after the LDS Church lifted its priesthood and temple restriction on black Latter-day Saints, Newell G. Bringhurst’s landmark work remains ever-relevant as both the first comprehensive study on race within the Mormon religion and the basis by which contemporary discussions on race and Mormonism have since been framed. Approaching the topic from a social history perspective, with a keen understanding of antebellum and post-bellum religious shifts, Saints, Slaves, and Blacks examines both early Mormonism in the context of early American attitudes towards slavery and race, and the inherited racial traditions it maintained for over a century. While Mormons may have drawn from a distinct theology to support and defend racial views, their attitudes towards blacks were deeply-embedded in the national contestation over slavery and anticipation of the last days. This second edition of Saints, Slaves, and Blacks offers an updated edit, as well as an additional foreword and postscripts by Edward J. Blum, W. Paul Reeve, and Darron T. Smith. Bringhurst further adds a new preface and appendix detailing his experience publishing Saints, Slaves, and Blacks at a time when many Mormons felt the rescinded ban was best left ignored, and reflecting on the wealth of research done on this topic since its publication” (Greg Kofford).

Benjamin Powell, Out of Poverty: Sweatshops in the Global Economy (Cambridge University Press, 2014): “This book provides a comprehensive defense of third-world sweatshops. It explains how these sweatshops provide the best available opportunity to workers and how they play an important role in the process of development that eventually leads to better wages and working conditions. Using economic theory, the author argues that much of what the anti-sweatshop movement has agitated for would actually harm the very workers they intend to help by creating less desirable alternatives and undermining the process of development. Nowhere does this book put ‘profits’ or ‘economic efficiency’ above people. Improving the welfare of poorer citizens of third world countries is the goal, and the book explores which methods best achieve that goal. Out of Poverty will help readers understand how activists and policy makers can help third world workers” (Amazon).