Valerie M. Hudson, Bonnie Ballif-Spanvill, Mary Caprioli, Chad Emmett, Sex & World Peace (Columbia University Press, 2012): “Sex and World Peace unsettles a variety of assumptions in political and security discourse, demonstrating that the security of women is a vital factor in the security of the state and its incidence of conflict and war. The authors compare micro-level gender violence and macro-level state peacefulness in global settings, supporting their findings with detailed analyses and color maps. Harnessing an immense amount of data, they call attention to discrepancies between national laws protecting women and the enforcement of those laws, and they note the adverse effects on state security of abnormal sex ratios favoring males, the practice of polygamy, and inequitable realities in family law, among other gendered aggressions. The authors find that the treatment of women informs human interaction at all levels of society. Their research challenges conventional definitions of security and democracy and shows that the treatment of gender, played out on the world stage, informs the true clash of civilizations. In terms of resolving these injustices, the authors examine top-down and bottom-up approaches to healing wounds of violence against women, as well as ways to rectify inequalities in family law and the lack of parity in decision-making councils. Emphasizing the importance of an R2PW, or state responsibility to protect women, they mount a solid campaign against women’s systemic insecurity, which effectively unravels the security of all” (Amazon).

Eric Nelson, The Hebrew Republic: Jewish Sources and the Transformation of European Political Thought (Harvard University Press, 2010): “According to a commonplace narrative, the rise of modern political thought in the West resulted from secularization—the exclusion of religious arguments from political discourse. But in this pathbreaking work Eric Nelson argues that this familiar story is wrong. Instead, he contends, political thought in early-modern Europe became less, not more, secular with time, and it was the Christian encounter with Hebrew sources that provoked this radical transformation. During the sixteenth and seventeenth centuries, Christian scholars began to regard the Hebrew Bible as a political constitution designed by God for the children of Israel. Newly available rabbinic materials became authoritative guides to the institutions and practices of the perfect republic. This thinking resulted in a sweeping reorientation of political commitments. In the book’s central chapters Nelson identifies three transformative claims introduced into European political theory by the Hebrew revival: the argument that republics are the only legitimate regimes; the idea that the state should coercively maintain an egalitarian distribution of property; and the belief that a godly republic would tolerate religious diversity. One major consequence of Nelson’s work is that the revolutionary politics of John Milton, James Harrington, and Thomas Hobbes appear in a brand-new light. Nelson demonstrates that central features of modern political thought emerged from an attempt to emulate a constitution designed by God. This paradox, a reminder that while we may live in a secular age, we owe our politics to an age of religious fervor, in turn illuminates fault lines in contemporary political discourse” (Amazon). 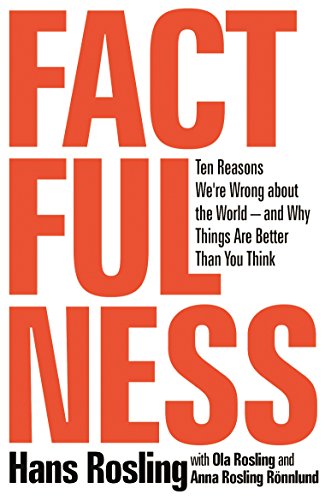 Hans Rosling with Ola Rosling and Anna Rosling Ronnlund, Factfulness: Ten Reasons We’re Wrong About the World–and Why Things Are Better Than You Think (Flatiron Books, 2018): “When asked simple questions about global trends―what percentage of the world’s population live in poverty; why the world’s population is increasing; how many girls finish school―we systematically get the answers wrong. So wrong that a chimpanzee choosing answers at random will consistently outguess teachers, journalists, Nobel laureates, and investment bankers. In Factfulness, Professor of International Health and global TED phenomenon Hans Rosling, together with his two long-time collaborators, Anna and Ola, offers a radical new explanation of why this happens. They reveal the ten instincts that distort our perspective―from our tendency to divide the world into two camps (usually some version of us and them) to the way we consume media (where fear rules) to how we perceive progress (believing that most things are getting worse). Our problem is that we don’t know what we don’t know, and even our guesses are informed by unconscious and predictable biases. It turns out that the world, for all its imperfections, is in a much better state than we might think. That doesn’t mean there aren’t real concerns. But when we worry about everything all the time instead of embracing a worldview based on facts, we can lose our ability to focus on the things that threaten us most. Inspiring and revelatory, filled with lively anecdotes and moving stories, Factfulness is an urgent and essential book that will change the way you see the world and empower you to respond to the crises and opportunities of the future” (Amazon).

N.T. Wright, Paul: A Biography (HarperOne, 2018): “In this definitive biography, renowned Bible scholar, Anglican bishop, and bestselling author N. T. Wright offers a radical look at the apostle Paul, illuminating the humanity and remarkable achievements of this intellectual who invented Christian theology—transforming a faith and changing the world. For centuries, Paul, the apostle who “saw the light on the Road to Damascus” and made a miraculous conversion from zealous Pharisee persecutor to devoted follower of Christ, has been one of the church’s most widely cited saints. While his influence on Christianity has been profound, N. T. Wright argues that Bible scholars and pastors have focused so much attention on Paul’s letters and theology that they have too often overlooked the essence of the man’s life and the extreme unlikelihood of what he achieved. To Wright, “The problem is that Paul is central to any understanding of earliest Christianity, yet Paul was a Jew; for many generations Christians of all kinds have struggled to put this together.” Wright contends that our knowledge of Paul and appreciation for his legacy cannot be complete without an understanding of his Jewish heritage. Giving us a thoughtful, in-depth exploration of the human and intellectual drama that shaped Paul, Wright provides greater clarity of the apostle’s writings, thoughts, and ideas and helps us see them in a fresh, innovative way. Paul is a compelling modern biography that reveals the apostle’s greater role in Christian history—as an inventor of new paradigms for how we understand Jesus and what he accomplished—and celebrates his stature as one of the most effective and influential intellectuals in human history” (Amazon).

Gregory A. Boyd, Cross Vision: How the Crucifixion of Jesus Makes Sense of Old Testament Violence (Fortress Press, 2017): “The Old Testament God of wrath and violence versus the New Testament God of love and peace it’s a difference that has troubled Christians since the first century. Now, with the sensitivity of a pastor and the intellect of a theologian, Gregory A. Boyd proposes the “cruciform hermeneutic,” a way to read the Old Testament portraits of God through the lens of Jesus’ crucifixion. In Cross Vision, Boyd follows up on his epic and groundbreaking study, The Crucifixion of the Warrior God. He shows how the death and resurrection of Jesus reframes the troubling violence of the Old Testament, how all of Scripture reveals God’s self-sacrificial love, and, most importantly, how we can follow Jesus’ example of peace” (Amazon).