In the interests of science, researchers asked this question. Then wrote a paper in the Journal of Evolution and Human Behavior. But you don’t need to read the paper because, thanks to the Visual Communication Guy, the results have been distilled into this handy-dandy infographic.

As a man with heavy stubble (based on these classifications), these results do not look too bad. Still, I wish I could grow mine out just a bit fuller… 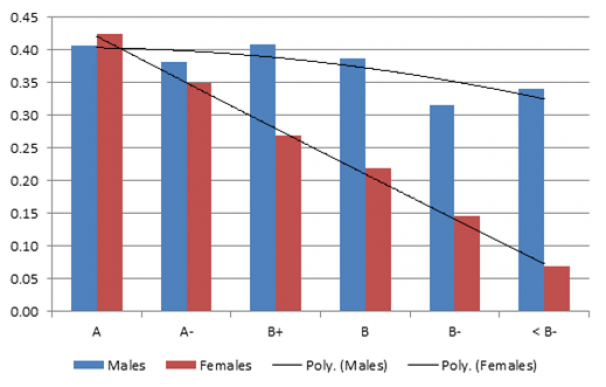 Yesterday I decided to poke a hornet’s nest again and write about gender roles at Times And Seasons once more. Some folks are emailing me to tell me how much they like it (which doesn’t happen very often). Other folks are describing it as “the most excruciating pseudo-intellectual, and self-contradicting drivel I’ve read in recent years.” ByCommonConsent provided their own insightful commentary, which you can see below:

For what it’s worth, one of the main reasons I write about this issue is because lots of other folks (some of whom could certainly do better than me) won’t touch it. I respect that. It’s sort of like running for political office: you have to question them motives of anyone who voluntarily does it, but you also have to wish that more normal human beings would. I think these hot-button issues are really important, and I hope that I can make a case for a basically socially conservative position that will enhance the discussion.

With that goal in mind, I’m planning on one more post on this topic. This one took 3 from-scratch attempts, though, were most of my blog posts are done in one. So it will probably take another 2-4 weeks before I come out with the next one.

Not to be outdone by my mum’s brilliant post on female ordination this morning, I decided to poke a sensitive topic as well with my post at Times And Seasons: I Believe in Gender Roles.

Brenda Cronin had an op ed in the Wall Street Journal on Saturday arguing that if you want to decrease the gap between what men and women make, then you need to make work more flexible. This puts me in a bit of a philosophical bind because:

In any case, I found the research pretty illuminating. For men and women who graduate with an MBA there is initially no pay gap, but it starts to appear after 5 years and is pretty entrenched at 15. What drives the gap?

Three factors explain 84% of the gap. Training prior to MBA receipt, (e.g., finance courses, GPA) accounts for 24%. Career interruptions and job experience account for 30%, and differences in weekly hours are the remaining 30%. Importantly, about two-thirds of the total penalty from job interruptions is due to taking any time out.

So about a quarter of the gap isn’t going to go away because it’s based on gender-neutral criteria (what classes you take and how well you did). Another 60% of the gap is simply based on time worked. If you work more, you will get paid more. This isn’t rocket science. I think it’s pretty stupid, however, because it leads to a culture of conspicuous chair-time instead of actual results. I’d love for companies to modernize work expectations because it’s the smart thing to do (and also because–as a man–I like having time with my family, too). And if that results in more gender equality: so much the better.