Writing for the Atlantic, Matthew Obrien points out the rather terrifying data on long-term unemployment in the United States. 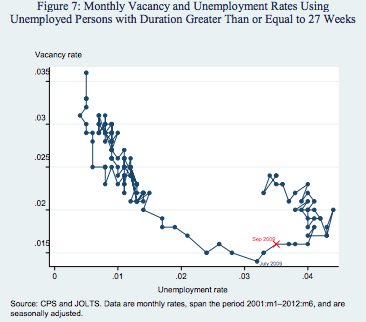 The gist of this chart–and of the article–is that once a worker has been unemployed for more than 6 months they become virtually unemployable. Companies don’t even want to consider them. As a result, the high unemployment rate during the current Great Recession can permanently increase poverty in our nation because it has led to people having no job for extended periods of time. That’s all true, and it’s all scary.  But at the end, Matthew makes an erroneous assumption. He writes:

It’s what economists call hysteresis, the idea being that a slump, left untreated, can make us permanently poorer by reducing our future ability to do and make things.

In reality, however, the problem is not just a slump left untreated. It’s a slump maltreated. That maltreatment in this case has been the extension of unemployment insurance basically without limit. This sounds compassionate, but economists have known since at least the 1970s that the direct result of extending unemployment benefits is that people are unemployed for longer. Two studies (both from the 1990s) make this point:

In plain English: economists have known since the 1970s that the more you extend unemployment insurance the longer people remain unemployed. Why do we have a huge crisis with people remaining unemployed for 6 months or more? In part, at least, it’s a direct, foreseeable, and well-known effect of extending unemployment insurance. This problem is not merely caused by the Great Recession. It’s also caused by political pandering on the part of politicians in passing policies that sound nice but which lead directly to catastrophe.

6 thoughts on “Atlantic: The Unemployment Cliff”