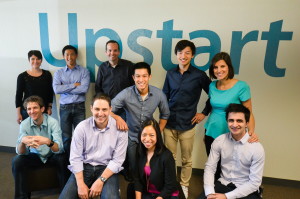 This idea is simple to explain, but the implications are much more complex and murky. Take a young, 20-something college graduate and use the kind of information they would put on a résumé (college degree, GPA, etc.) to predict their future earnings over the next 10 years. Then, offer them a lump-sum payment now in exchange for a percent of those earnings.

It sounds a bit like science fiction (very good science fiction, in fact), but it’s actuallya real-live business named Upstart (that’s them in the photo) that is already earning candidates an average of $50,000 now in return for a slice of their future successes. On the one hand, it’s a great solution to a frustrating problem. Smart young grads have a ton of potential, but they are also liquidity-constrained. Borrowing from their future to kickstart their careers makes a lot of sense. It makes sense to investors, too, with a targeted rate of return in the range of 8-9%.

But it also looks a little bit like indentured servitude. Of course it isn’t, not today anyway. For one thing, there are safeguards: no more than 7% of income can be taxed, and there’s a cap on how much you have to pay out if you strike it rich and sell a business for $100m. For another, the entire dynamic is inverted: instead of down-and-out, vulnerable people the service is targeted towards those with the  best degrees and the most options.

Here’s a video from Upstart, the name of the company, explaining what they do.

This is one of those articles that I think catches a real glimpse of ways the future might be totally different from what we’re used to, but not based on what you normally think of when you think of futuristic inventions.

1 thought on “Selling Your Soul (Or At Least Future Paychecks)”