Slate has a great set of interactive maps for exploring abortion and contraception laws around the world. One of the stubborn bits of misinformation that I regularly come across (even with otherwise politically informed and aware individuals) is the idea that the United States has moderate laws on abortion that only allow abortions under certain exceptions. This is not true. As the very first selection on the very first map indicates, abortion is legal in the United States for any reason whatsoever. 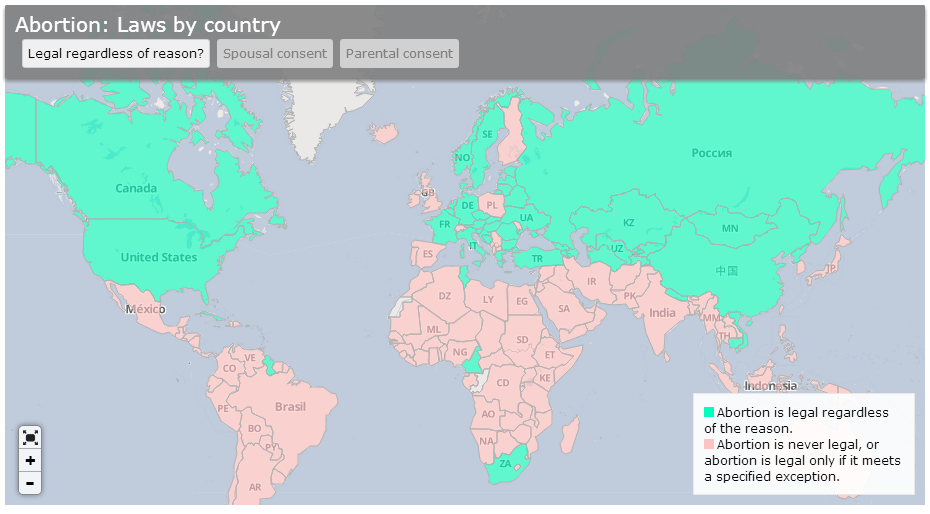 The useful thing about these maps, of course, is that they come from Slate. I don’t think anyone accuses Slate of having a pro-life slant. Slate, for its part, credits a variety of sources running from ostensibly neutral, like the UN, to the overtly pro-choice, like the Guttmacher Institute. (The Guttmacher Institute is a branch of Planned Parenthood.)

There are other useful maps as well. The second one reinforces the point of the first one: every possible exception category is included in the US (because no reason at all is needed). Farther down, the “Abortion: Laws by state” map has a setting for “Trigger laws” that helpfully illustrates the fact that overturning Roe would not, by itself, make abortion illegal. Only 6 states (including my home of Virginia) have bans that would automatically go into effect if Roe were overturned.

And, just to preempt objections from folks who are familiar with Roe but not with Doe, it was the two court cases working together that created our present circumstance where no reason at all is required for an abortion in the United States. Although Roe ostensibly allows states to enact regulation based on trimester, they are forced to leave open a “health” exception. Doe, handed down the same day as Roe, defined “health” so broadly that basically anything goes and–in addition– left the determination in the hands of the woman’s doctor. Which is to say: the abortionist gets to decide if the abortion is for the woman’s “health”, with no oversight or penalty. This is, in effect, abortion without any restriction whatsoever.

Which brings me to the final map I found interesting. It’s still the “Abortion: Laws by state” map, but this time the “Abortion providers” filter. What this illustrates is how few and far between abortion providers are. The real difficulty in securing an abortion in this country (when it exists) is not about legality. It’s about the fact that so few doctors are willing to perform abortions. To what extent this is from pressure by the pro-life movement vs. the internal psychological toll of killing human beings for a living is a topic I’ll leave for another day. (If you think the psychological toll is not important, however, I suggest you try reading this paper, which gives a pro-choice abortionist’s perspective on the matter.)

[NOTE: This post updated at about 5:30pm Eastern to correct an error. The original post stated that Kermit Gosnell was never charged with illegal late-term abortions, but a friend of mine who attended the trial told me that he was. She also provided this article.]