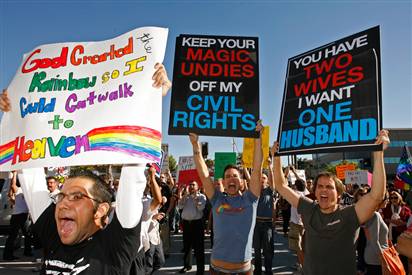 A lot of things are disconcerting about the same-sex marriage debate. One of them–which I’ve already discussed–is the way that social conservatives were silent for too long in pairing a principled stand for traditional marriage (one Christian virtue) with sincere interest in the welfare of homosexuals as brothers and sisters (an even more important Christian virtue). But another comes from the opposite side of the political spectrum.

Eric Teetsel explains it harshly but clearly in a post for the Witherspoon Institute:

Sherif Girgis, Ryan Anderson, and Robert George recently wrote a masterful defense of what marriage is and why it matters. It is no exaggeration to say that their argument is the intellectual foundation for marriage advocates, used by the National Organization for Marriage, the Heritage Foundation, and others (including my own Manhattan Declaration).

What did the same-sex marriage movement do with this seminal book? They ignored it.

They don’t have answers to the authors’ claims; they don’t need them. Advocates of same-sex marriage aren’t concerned about the logic of their arguments or the precedents they establish. Forget facts; theirs is a more powerful weapon in the era of amusement: fad.

As I said: harsh. But I think Teetsel is largely right, even if it could have been expressed with more sensitivity. In almost all cases the “debate” goes something like this: support gay marriage or be tarred a bigot. With some exceptions that seems to be about it. It’s as though Americans who support gay marriage think that the Westboro Baptists genuinely represent the traditional marriage constituency.

With the upcoming Supreme Court decision, this debate may be winding down or moving on. Then again, maybe not. But in either case, I think it would be incredibly beneficial for those who support marriage equality to read the paper Teetsel referenced. It’s called “What Is Marriage?” and it appeared in the Harvard Journal of Law and Public Policy. It’s not exactly short or light reading, but as Teetsel points out, it’s the actual expression of what defenders of traditional marriage actually believe. No matter how this debate plays out, I think that’s something worth understanding. Primarily, I might add, because I think while it may not be what gay marriage supporters want to hear (obviously), it’s notably free of what bigotry, animosity, or intolerance as a motivation. Vocal minority of fearful idiots notwithstanding, that’s not what the traditional marriage movement is really about.

So go ahead: give it a read.

2 thoughts on “Beyond Bigotry: The Real Opposition to Same-Sex Marriage”