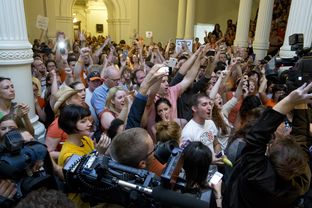 The Texas Tribune is reporting that the GOP attempt to pass one of the nation’s strictest abortion laws in Texas failed last night / early this morning because the Republicans were unable to vote before midnight. The whole thing makes me so depressed.

It depresses me and it shames me as an American. There may have been some few folks who acted out of principle, but all I see–on both sides–is a rowdy crowd rioting because their team won or lost a sporting event.