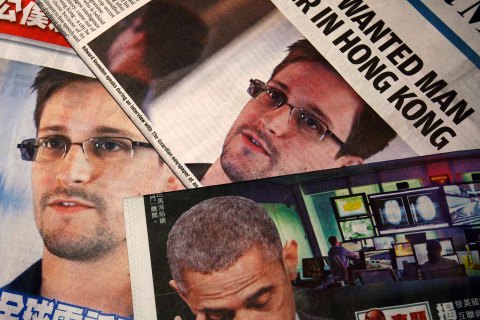 Most of what I read about Snowden makes me think that no one knows what’s really going on. Or, phrased differently, the folks who do know what’s going on aren’t talking. Still, here are two interesting theories that I thought were interesting enough to share.

One of the weird tidbits to come out recently about Snowden was Putin’s comment that Snowden should stop hurting Russia’s allies the US with all his irresponsible leaking. Say what? Weren’t the Russians, Chinese, and everyone else thrilled to see America humiliated on the world stage? What gives?

Blogging for Foreign Policy magazine, Daniel Drezner suggests that Putin’s change of heart is real and that it was caused by Snowden’s ties to Wikileaks. Alone, Snowden was just embarassing the US. But Wikileaks is the enemy of all nation-states (the Westphalian Order) and that means that the more Snowden relies on Wikilieaks the less likely he is to find a safe haven anywhere.

Even more intriguing than Putin’s about-face is the theory that one of Snowden’s most recent pronouncements wasn’t actually from Snowden. John Aravosis at America Blog highlights three tells in the Wikileaks-released document that indicate it wasn’t originally authored by an American.

This could be as simple as a European Wikileaks employee editing Snowden’s original writing for publication, but it’s certainly odd. Wikileaks has since edited the document to conform to American standards without comment or explanation, which is weirder still. Weird enough that it made the National Review’s Morning Jolt, anyway.

I don’t have any conspiracy theories or explanations. I just have a hunch that, at a minimum, there are crucial incentives of key players that we just don’t know about. I’m not going to hold my breath waiting, either, since the full story will come it (if it ever comes out) decades from now the way early Cold War espionage secrets started to come out only after the world had begun to really move on well after fall of the USSR. (And it’s not like we know all of those dirty secrets yet, either.)