Take a look at the chart, folks. 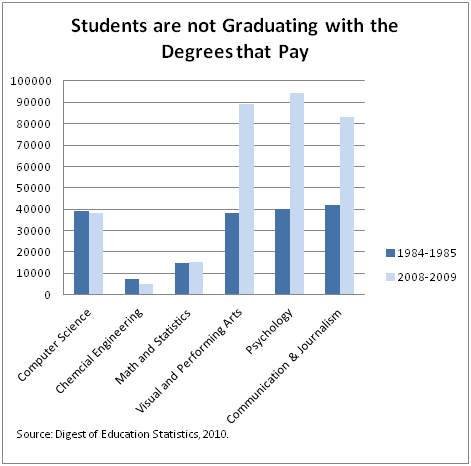 It’s an old chart from a Marginal Revolution post back in 2011, but WalkerW (who comments here at DR) just showed it to me the other day. And I mean, come on. We’ve got less comp sci grads, but we’re doubling down on Visual and Performing Arts, Psychology, and Communications & Journalism? Who are these people, and what do they think college is for? The idea of a liberal arts education–that you go spend four years living the life of the mind–is quaintly romantic I suppose, but it’s also (in no particular order):

It’s dangerous because, with easy availability of loans, everyone wants to go. And as quantity demanded increases, so does the price. This means that all those folks going to get a legitimate degree have to pay more because their tuition is chained to the tuition of all those lemmings who think of college as a rite of passage rather than an investment in human capital. And, to forestall the horde of unemployed humanities majors with nothing better to do than staunchly defend the virtue of Art and the Noble Human Spirit on dar Interwebs, let’s get to #2: elitism. Spending 4 years reading Proust or Joyce before you go to law school sounds very romantic, but for a lot of kids college isn’t a way to maintain the status they were born in, but to claw their way up the social ladder. Waxing poetic about the glorious idealism of liberal arts education is well and good for the upper-middle class, but it’s the same kind of patronizing cluelessness that likes to bemoan the loss of manufacturing jobs that you would never in a million years consider working yourself. For some college might be an affectation, but you’re making it more expensive for those who actually need the degree and the skills so that they can have an alternative to driving a forklift if they so desire.

Which brings us to #3: deception. First of all, most of those humanities majors aren’t actually reading Proust or Joyce and we all know it even if no one will admit it. The real reason upper- and middle-class Americans go to college is to get wasted early and often. Which makes college something like the world’s most expensive and least exciting amusement park.

To be perfectly clear: I think there actually is great practical value in the humanities (I know I wish more business people knew how to write) and I also firmly believe that art doesn’t need to be practical to be valuable. But I also think that it’s a little bit silly to get a degree in something that’s not practical if you’re borrowing money to do it. And, as tuition prices are linked, that silliness has extreme negative externalities. I had to pay more for my education–which I picked with an eye towards ROI–because of all the folks rushing to get a 4-year degree in, like whatever because they can.

(Alternate title for this post: In which I rant at humanities majors. It’s OK, folks. It’s out of my system now.)

If we want to boost our economy with education, we need to provide incentives to get people to study subjects that will be good for our economic growth and for their standard of living. You could argue that it’s not all about money, damnit, and that helping kids get degrees in visual and performing arts has intangible benefits for society. Even if that’s right, however, the current structure of our program is such that government doesn’t actually pay for people to go to college. It just guarantees their debt, in part by making it impossible to discharge student loan debt in bankruptcy. What part of suckering a teenager into wracking up $100,000 in student loans to master method acting fulfills this romantic vision of a liberally educated society, again?

20 thoughts on “The Problem with High Tuition and Student Loans”