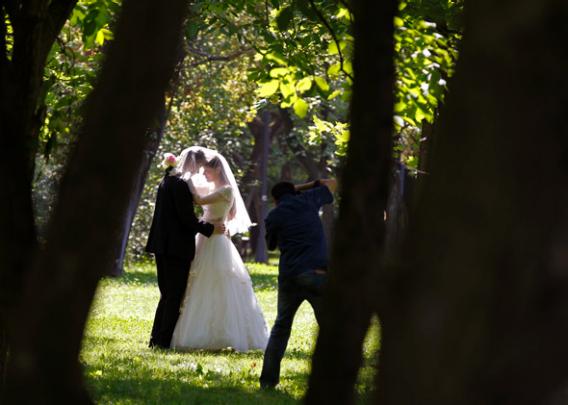 Slate has an interesting article about the exclusivity of Mormon weddings. I thought I’d weigh in and share some experiences about the decisions my wife and I made.

The background is just a little complex, but here goes. First: Mormons believe that marriages can be “for time and all eternity” instead of “till death do you part.” This is based on a ritual Mormons call “a sealing” by which the husband and wife are “sealed” together for eternity.

Second, this sealing can only be performed in Mormon temples, which means that only adult Mormons in good standing can attend. If you are not a Mormon, not in good standing, or too young then you can’t come.

In theory, this is not a problem, because in theory a “sealing” and a “wedding” are not the same thing. In many countries that don’t recognize Mormon sealings as legally binding, Mormons have to get a civil marriage first and then they go to the temple to get sealed. But in the United States, a temple sealing is legally recognized as a marriage so you can just have the temple ceremony and that’s it.

If you make that choice, then friends and family who can’t enter the temple feel excluded. The logical choice, then, is to go ahead and continue to separate the sealing from the wedding, but the Church has discouraged this for the past few decades with a policy that says that if you get married civilly first (in the US, where that’s optional as opposed to a necessity) you must subsequently wait a full year to be sealed in the temple.  Slate gave the following quote from a 1960 handbook as the origin of this policy:

Where couples deliberately refuse temple marriage for reasons of their own, and afterward desire a sealing, they should be asked to wait for at least a year in which to demonstrate their sincerity and worthiness to receive this blessing.

I can’t verify the quote in any way, and it seems to leave the door open to local leaders to enforce or not. After all, a couple that gets married civilly first isn’t necessarily “refusing” anything. They are just scheduling. But, whatever the possible interpretations might be, in practice it means you have to get married in the temple only or wait a year.

Since 1 year is sort of the standard time you have to wait to go to the temple after a serious sin (often: pre-marital sex), the implication is pretty obvious: any Mormon couple that gets married civilly first and then has to wait a year is sort of seen as possibly not being able to actually live the Mormon standards of no sex before marriage. Between that, and just the fact that it’s frowned upon at all, most Mormons just go ahead with their temple wedding and then have a reception after the fact where everyone can come.

My wife and I though this was pretty dumb, so what we did was have the temple sealing on a Thursday, and then have a ring ceremony on Friday. This isn’t really rebellious at all: the exchange of rings is an optional part of the temple sealing so we skipped it. We really did wait to exchange rings until the ring ceremony. My wife’s grandfather even walked her down the aisle, and my dad officiated.

Then we all partied and danced and ate good food and served lots and lots of wine. Yup, Mormons don’t drink, but at least half (probably more) of our guests weren’t Mormon. So my beautiful bride and I had gone out ahead of the wedding to purchase several boxes of wine. Why? Because a wedding is not just about us. It’s about us, and our families, and our friends, and our community. We wanted everyone to feel welcome.

The Slate article mentions a group–Family First Weddings–that is advocating to change the policy that requires the 1-year waiting period after a civil ceremony, and Holly Welker (who wrote the piece) seems mystified at the reluctance to change such a minor, non-theological policy. The problem is that advocacy in the Mormon Church is always a sensitive topic for historical reasons. Personally, I’d love to see the policy changed, but in the meantime I was happy to cheerfully circumvent it, and I think it’s a good decision other Mormons can make.

Sometimes we make things harder than they have to be, folks. The Word of Wisdom is the name of the doctrine that forbids drinking alcohol, but at no point does it say “drinking alcohol is immoral”. It’s just forbidden for Mormons and at this time. Some Mormons infer that drinking alcohol is immoral for everyone (the way stealing or lying is) and even concoct absolutely absurd explanations for how Jesus Christ never drank win. He drank grape juice. Really, people?

Similarly, the policy says no civil weddings before temple sealings without a 1-year waiting period. I’m not sure that the ring ceremony approach is the perfect solution for everyone, but it worked great for us and I’m glad we did it. More folks should try it, or creative workarounds like it, while we wait for the policy to get changed. Or not.

All I’m saying is this: we have enough rules and commandments as it is. And, as a devout Mormon, I fully believe in following them. But we don’t need to invent more than there already are. Take a deep breath, use common sense, and don’t be afraid to try something different. That’s my $0.02.