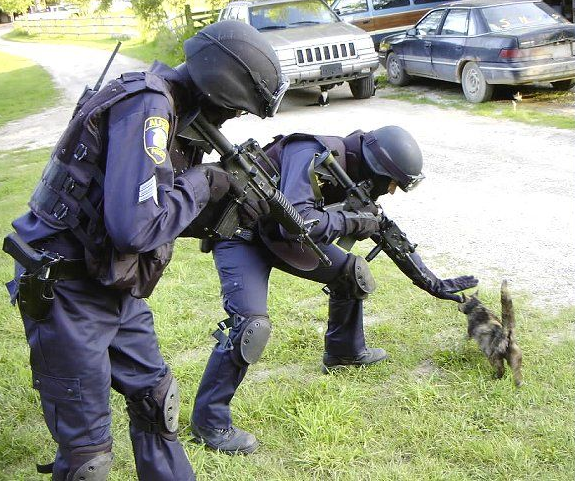 Yeah, that’s right: seventy three agencies of the US government have armed personnel. That’s 40 that have their own armed divisions outright, and 33 more via various offices of the inspector general (which provides watchdogs for other government agencies that might not have their own pistol-packers).

This came to light when the EPA sent some of their own SWAT-style troopers to participate in a multi-agency raid in Alaska. The raid involved armed officers from the U.S. Fish and Wildlife Service, the Bureau of Land Management, the Coast Guard, the National Oceanic and the Atmospheric Administration and the U.S. Park Service in addition to the EPA. I’m not saying environmental regulations aren’t important, but I’m curious to know how they justify the use of a paramilitary assault.

I’m also not sure what is more ridiculous: that NOAA has armed officers or that apparently the feds plan raids like teenagers planning a house party when the ‘rents are out of town. Did they just print up flyers and distribute them to every federal agency they could find? Was anyone not invited to this shindig? Somewhere, are the armed agents of the Federal Reserve Board (yes, they have some, too) upset that they didn’t find out until too late to fly to Alaska and join in?

Hey, at least this time it wasn’t an undercover FBI sting operation on Amish dairy farmers.

(You thought I was joking about that last one, didn’t you? And then you clicked the link and realized I wasn’t even exaggerating. Now you’re not sure whether to laugh or cry. Welcome to my world.)

1 thought on “The US Government has 73 Armed Agencies”