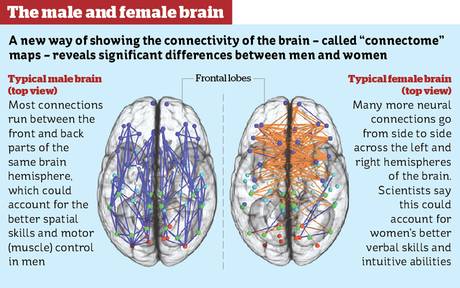 The Independent has an article on a study about the hardwired difference between male and female brains. According to the article, men have more connection going from front-to-back and women have more going from side-to-side, and this might explain superior male motor skills and superior female verbal skills. The argument is that these characteristics are genetic, not behavioral, and this would be a point for gender essentialism, which is the idea that gender is to a great degree biologically determined and not merely a social construct.

I also thought it was interesting that the researchers were quoted on gender complementarity several times, such as:

These maps show us a stark difference – and complementarity – in the architecture of the human brain.

It’s quite striking how complementary the brains of women and men really are.

Of course in an ideal world science is not politicized, but at a minimum this article is a good place to explain the conservative view on gender equality. The most simplistic interpretation of gender equality, of course, is gender sameness. Differences between the sexes are downplayed or relegated to secondary importance. (Man vs. woman, right-handed vs. left-handed… whatever.) But conservatives hold a different view, which is that men and women are equal but different. The derogatory term for that would be something like “separate but equal”, but conservatives would use the term “complementary,” meaning that men and women are different but that these differences are not about better vs. worse, but are merely two halves of a puzzle that works best when both pieces are given equal consideration despite their different natures.

2 thoughts on “Gender Essentialism and Complementarity”